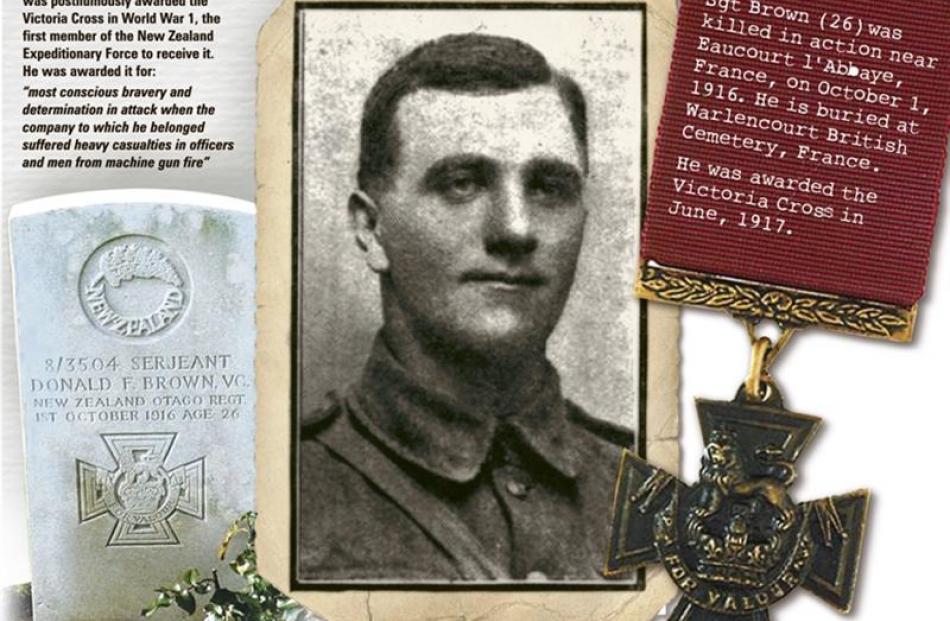 The family of the soldier believed to be North Otago's only Victoria Cross recipient is searching for his medal.

Sergeant Donald Forrester Brown was posthumously awarded the Victoria Cross in World War 1, and his great-niece Trudi Bryant, of Wellington, this week appealed for help to find it.

Last year, she and her sister visited Waitaki Boys' High School, believing it to be in the school's Hall of Memories.

But it was not there.

She has also contacted the North Otago Museum, again without success.

Her last report of the medal is as part of a display in 1962 at the North Otago Pioneer Gallery and Museum. But that museum no longer exists.

The National Army museum believes the Victoria Cross is in private hands because it is not on the Cenotaph database.

"We would be reassured to know it is still safe within New Zealand," Mrs Bryant said.

During the Battle of the Somme, while his company was suffering heavy casualties, Sgt Brown, with a comrade, rushed a machine-gun, killing the four crew and capturing the gun.

The advance continued until the company was again held up by machine-gun fire. Again, Sgt Brown and his comrade rushed the gun and killed the crew.

Subsequently, Sgt Brown attacked, single-handed, a machine-gun which was holding up the attack, killed the gun crew and captured the gun.

Later, while sniping the retreating enemy, he was killed.

Sgt Brown is listed on the Cenotaph database as a farmer from the Totara district. He was born in Dunedin, was single, and his mother was Mrs R. Brown, of Thames St, Oamaru.

His VC was presented to his father, Robert Brown, at Oamaru, by the governor-general on August 30, 1917.