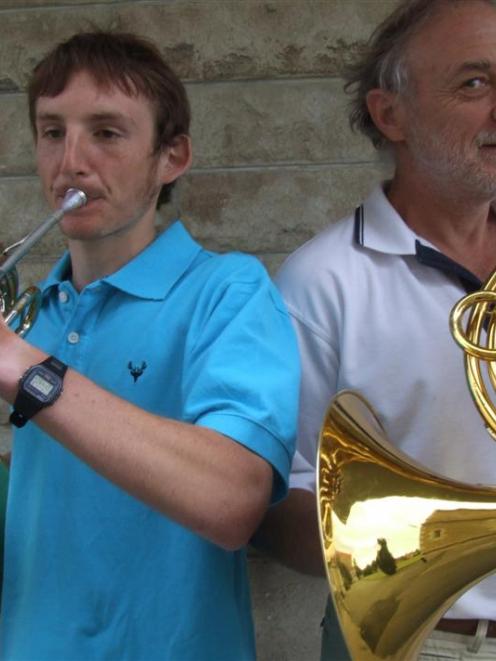 James (left) and Ben Liley are both playing the French horn at the Waitaki summer music camp in Oamaru this week. Photo by Sally Rae.
Ben Liley jokes that he was given his son's "hand-me-up" French horn.

Ben, who celebrated his 51st birthday on Tuesday, and James (19), are attending the 13th annual Waitaki summer music camp at Waitaki Boys High School this week.

Both are playing the French horn, along with former All Black and retired medical professor Hugh Burry.

Prof Burry was at medical school in Dunedin with Ben Liley's parents.

Ben Liley started playing the French horn when he was at secondary school in Auckland about 35 years ago. It was a rental instrument and he only played while he was at school.

Now an atmospheric scientist for Niwa living in Alexandra, he did not start playing again until his son gave him the "hand-me-up" French horn.

James Liley was learning the piano when his father suggested he start learning an orchestral instrument.

He suggested the French horn because orchestras were always looking for French horn players, and he thought he could help with what little he could remember from his own playing days.

When James moved on to a newer instrument, he passed the old one to his father.

Ben now plays in the Central Otago Regional Orchestra, while James, who is studying medicine in Dunedin, plays in the Dunedin Youth Orchestra.

James has attended a few of the summer music camps while his father had never "felt up to it". He was enjoying his first camp, saying it was great to have a whole week of intensive playing.

The pair agreed there was no rivalry between them.

"He's far too good for me. I'm nowhere near him. He overtook me a long time ago," Ben said.

The camp was one of the best ways to get experience and was a "yearly boost", his son added.

The camp has attracted an orchestra of 60, from Auckland to Alexandra. The culmination of the week is a public concert in the school's auditorium on Saturday at 7.30pm.