The sight of a vintage car in Oamaru’s Harbour St is not unusual — unless it is being driven by a Hollywood star.

That was indeed the case yesterday, as actress Kirsten Dunst was behind the wheel of one such vehicle in the town’s Victorian precinct while filming a scene for Netflix production The Power of the Dog, directed by New Zealand’s Jane Campion.

The film — which also stars Benedict Cumberbatch, who was not in Oamaru — is described by entertainment website IMDb as a drama in which a ‘‘ pair of brothers who own a large ranch in Montana are pitted against each other when one of them gets married’’. 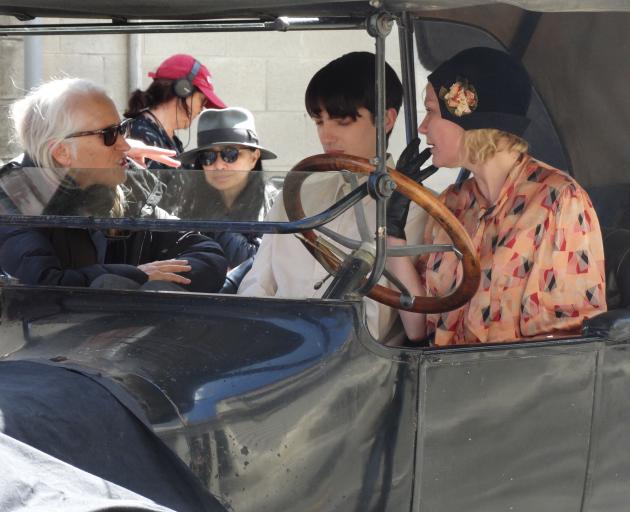 Actress Kirsten Dunst sits alongside actor Kodi Smit-McPhee while chatting to director Jane Campion during filming for movie The Power of the Dog in Harbour St in Oamaru’s Victorian precinct yesterday. Photo: Daniel Birchfield
Dunst, who plays a character named Rose, did a couple of laps of Harbour and Tyne Sts alongside actor Kodi Smit-McPhee in the car as it was towed behind another vehicle mounted with a camera.

After the scene was filmed she chatted briefly with Campion and another crew member, before being shuttled away in a 4WD.

Extras, many of whom live in Oamaru, dressed in period costume could be seen around the precinct for the majority of yesterday, as could several vintage cars.

Curious members of the public, many armed with cameras and cellphones, also took in the scene.

Sand and gravel was spread along sections of Tyne and Harbour Sts on Tuesday night to cover the tarmac and the Criterion Hotel was renamed the Emerton Hotel for the film.

Dunst and her fiancee, Jesse Plemons, who is also part of the cast, dined at Cucina restaurant on Tuesday night at a table with a view of lower Thames St.

Extras on the Harbour St set yesterday. Photo: Craig Baxter
Cucina co-owner Yanina Tacchini said it was ‘‘awesome’’ to have the couple enjoy their fare.

‘‘They were very laid back, had a great meal and were very relaxed. They came up to the bar just like normal people.

‘‘They said it was one of the best meals they have had in New Zealand. It was pretty cool.

‘‘They were also really interested about us and how we came to be in Oamaru.

‘‘They were amazed by the architecture of Oamaru and were going to see the penguins.’’

She said Dunst’s mother looked after the couple’s young son while they enjoyed a night out. They were due to fly from Dunedin to Auckland yesterday, she said.

The Power of the Dog is scheduled for release in 2021.