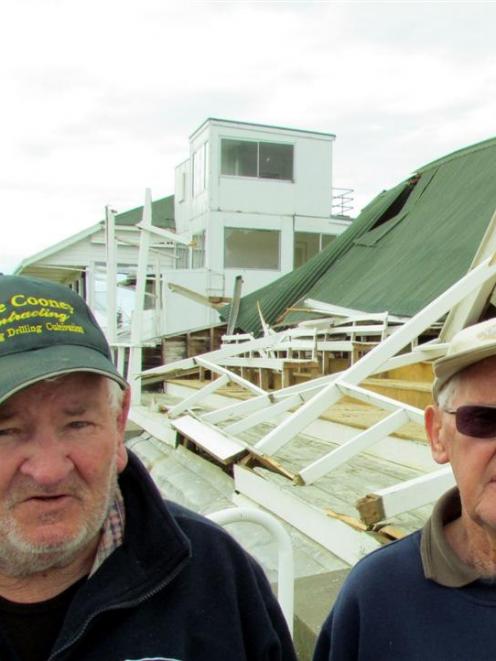 Bob Goodeve (left) and Dick Langford in front of the wrecked public stand last month. Photo by Andrew Ashton.
The Waimate trotting fraternity is confident racing at the township's racecourse will still go ahead this summer, but with uncovered stands.

The whole public stand and sections of the members' stand were damaged by storms last month.

The racecourse trustees, who administer the course, are waiting to hear from insurance assessors how much it would cost to rebuild the stands, but trustee and Waimate Trotting Club member Rob Crawford said he was ''pretty confident'' the annual December trotting fixture would still go ahead.

''We will be able to get the facilities that are needed to run the race meeting done immediately and they should start next week.

''The debris is well and truly gone and the demolition is completed. At this point we are still hopeful we will be able to race there on December 15.''

Mr Crawford said the stands would not be completely covered-in ''but we think we will be OK as far as the rest of the facilities are concerned''.

He said the damage to the stands was not expected to significantly affect possible crowd numbers.

Even though the roof on the whole of the public stand was destroyed in the recent storm, there had been no structural damage to the base, he said.

''The public stand is fine to be used as an open stand. We just have to decide what we will do with the other [members'] stand.

''We will certainly have one stand running, even though it would be an open stand.''

Although the members' stand roof was only partially damaged, the roof and the seating had been more intertwined than on the public stand, and there would probably be some ''construction issues'' to get through before it could be used, he said.