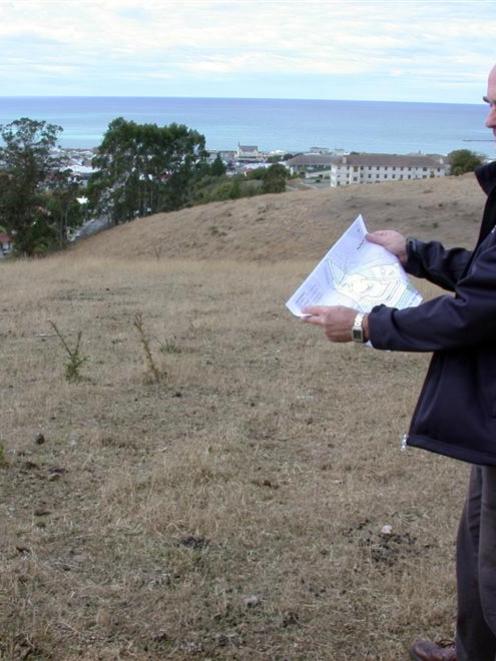 The council owns a 14.2ha site on the hospital hill, with views of Oamaru, the North Otago coast and inland to the Kakanui Mountains, and has now made public plans to develop a residential subdivision in four stages.

If the council decides to go ahead with the project, sections in the first stage could go on sale towards the end of next year at "aspirational prices" of more than $120,000.

Property manager Dougall McIntyre outlined the development to a meeting of the council's property committee earlier this week.

Yesterday, he gave further details in an interview with the Otago Daily Times.

Mr McIntyre said approval for the subdivision still had to be given by the council. It would be asked for authorisation before subdivision resource consents were sought.

Although named the "Hospital Hill Subdivision" at present, once development starts it will be renamed in keeping with the area.

The land to be developed consists of 7.96ha purchased from Ngai Tahu in June last year and the rest is freehold land owned by the council.

Both lots will be used for the development of sections ranging in size from 800sq m to 1450sq m, with an average size of 955sq m depending on the final detailed development plan.

The first stage is 18 sections with access off Eden St, using a portion of Stoke St, which can be developed utilising existing services. The entrance will be remodelled in keeping with the status of the subdivision.

The second stage has 27 lots, the third 33 lots, and the fourth stage 30 lots. They will be developed depending on market demand.

While the subdivision is divided into stages, it is being planned as one cohesive development.

The fully serviced sections are located along new roads and cul de sacs, with green space being incorporated into the subdivision.

The use of reserve areas in the subdivision is being discussed with the Department of Conservation.

Part of the skyline walkway around Oamaru is across the site and will be incorporated into the subdivision.

The development is being planned by Beca of Christchurch through Oamaru consultant John Shirley.

The council's consultant real estate agent, A. C. Spivey, has also provided advice on the development and marketing.

An estimate of the cost of developing the subdivision would not be made until a master plan was available and the council was asked to give its final approval, Mr McIntyre said.

The council already has the Forrester Heights subdivision planned on Cape Wanbrow looking north over the Oamaru Harbour and coast, a 27-section luxury residential subdivision on 5.842ha with sections selling for more than $300,000.

The council is waiting for Parliament to pass the Reserves and Other Lands Disposal Bill to lift reserve status over some of the land before proceeding with the development, although some sections have already been sold.