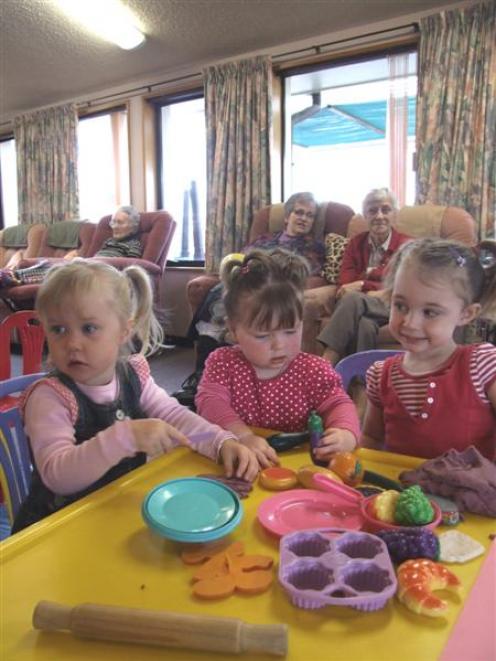 Attending the Iona Playgroup are Sophie Notman (2), Taylah Keen (13 months) and Olivia Mavor (3) watched by Iona home residents. Photo by Sally Rae.
The Iona Playgroup - believed to be the only playgroup in New Zealand associated with a rest-home - will celebrate its 15th anniversary on Thursday.

Past and present children, mothers, teachers and Presbyterian Support Otago representatives have been invited to a celebratory morning tea at Iona Home to mark the occasion.

The group meets in a lounge at Iona every Thursday from 9.30am until 11.15am, with residents also coming along to watch and interact with the children.

There was both indoor and outdoor play, along with music, and the residents enjoyed it, mother Amanda Notman said.

"They like nursing the babies, throwing the balls and the sing-song," she said.

Iona Home's activities co-ordinator Diane McCone said the play-group had been a great success and it was a "very special" milestone to mark.

It started with parents bringing their own toys, but money had been raised over the years and they now had "wonderful" equipment, Mrs McCone said.

The playgroup, including some residents, had been on outings to the beach, a farm and the public gardens, and had also had visits from animals.

The group is now in its second year without a co-ordinator and it was keen to hear from anyone interested in the role, Mrs Notman said.

A portrait fundraiser is being held on May 3 to raise money to replace play equipment.