It's a grabatology record - you can count on it 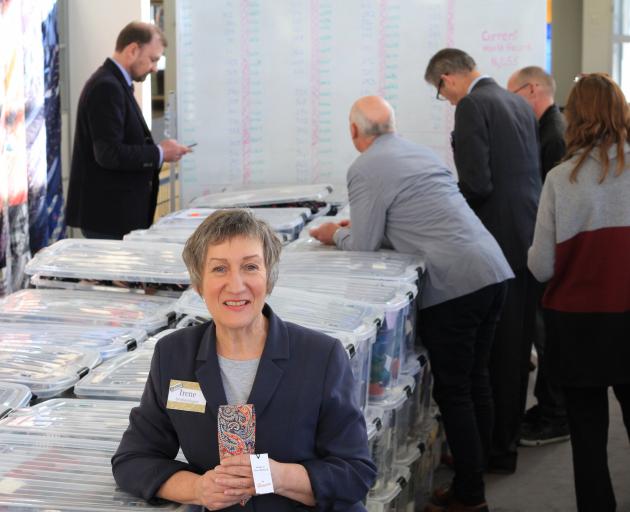 Holding the last tie counted, Irene Sparks relaxes with her world-record-breaking tie collection as her witnesses finalise the count in Oamaru on Saturday. Photo: Hamish MacLean
While grabatology - having a passion for collecting ties - is quirky and good fun, making an attempt at the Guinness World Record for it is a serious business, Oamaru grabatologist Irene Sparks says.

''Today has been serious, because it's the official attempt at the Guinness World Record, but it's also been fun - everyone's enjoyed themselves, we've had smiles, we've had laughs.

''There's been so many comments like, 'Good Lord, look at this.' Or like, 'Oh my God, would you wear this?'

Dr Ogden took a lifetime - 71 years - to amass his collection. But after collecting several hundred ties to make quilts, Mrs Sparks decided to give the record a go just four years ago. The bulk - 80% - of her ties came from op shops and so, in a way, her obsession became a nearly $10,000 contribution to charitable organisations.

But Mrs Sparks also was at the receiving end of good will after Otago Daily Times The Wash columnist Dave Cannan put out an appeal for ties two years ago and donations began to roll in.

It took three months to sort the ties into groups; she separated woollens, novelties, motifs, colours, stripes and patterns and stored them in plastic bins which were numbered and labelled.

Counters at the weekend counted the ties into bundles of 20, then into piles of 100 and then returned the ties to their bins.

Her husband Neil Sparks had the task of ''bin controller''. He collected the counted bins and entered counts into a spreadsheet, which was then reproduced on a whiteboard.

Mrs Sparks' team worked from 9am to 2.05pm counting and then witnesses tallied the counts. After an initial hiccup in the tallying, the total was reduced from 21,447 to 21,321, confirmed shortly before 3pm.

Mr Cannan, who attended the count as a guest counter, said when he learned about Mrs Sparks' venture, it appealed to his ''quirky sense of humour''. And with Mrs Sparks' blessing he put out a call for donations of ties.

Another guest counter, Waitaki Mayor Gary Kircher, said while ties were ''not always the most welcome piece of attire'' they had endured in men's fashion.

''There's a tie for every occasion, absolutely,'' Mr Kircher said after the count.