Love a duck - but feed it the right food 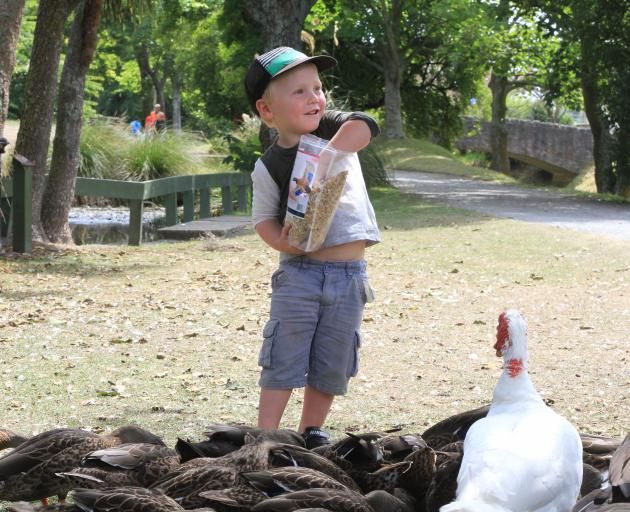 Jack Webster (3), of Oamaru, feeds the ducks in the Oamaru Public Gardens on Thursday. Photo: Hamish MacLean
There's a right way and a wrong way to feed a duck.

And too many people are feeding ducks the wrong way, Topflite general manager Greg Webster said.

The North Otago family-owned pet-food business - New Zealand’s first commercial producers of duck-specific food - has offered the Waitaki District Council a free trial of its product, Lucky Duck, to help get the message out that feeding ducks white bread was "doing more harm than good".

Wild-bird feed was a growing market in the pet food industry as Kiwis began taking the feeding of birds in their backyards more seriously, Mr Webster said, and about 18 months ago the company began producing duck food,  blending seeds, grains and duck pellets,  to meet  market demand.

"In the last year it has really taken off. I guess there’s been a lot of coverage in the media on the bird population and the whole cat, Gareth Morgan’s cat campaign ... that all goes with that whole awareness, I think," Mr Webster said.

"It’s a good way to get involved with wildlife, I guess. It’s not a pet that you’ve got to look after."

Oxford Bird Rescue’s Scott Bowman said he endorsed a nationwide strategy involving local councils to change people’s behaviour and that the public was "slowly" getting the message to change their duck-feeding practices.

The wild-bird rehabilitation facility cared for "between 300 and 400 sick, injured or abandoned ducks each season" but still received "outraged comments" from Kiwis who were used to tossing bread into a pond at a park for the birds.

Kiwis’ feeding methods should change too, he said.

Rather than throwing food into the water, feed should be scattered on the ground to encourage the natural foraging behaviour of ducks.

A Waitaki District Council spokeswoman said signs were erected near the pond in the Oamaru Public Gardens discouraging people from giving ducks bread and confirmed the council had been offered a free trial of the duck food this week.

"We’re going to take a look at it and will make contact with them in the next week or so," she said.