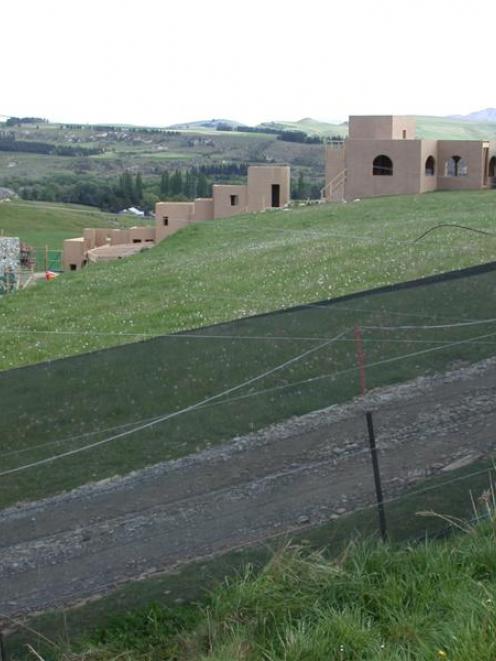 The movie set resembling a biblical village built for the film at Elephant Rocks, near Duntroon, last month. Photo by David Bruce.
Shooting of the feature movie Kingdom Come at two North Otago sites has been delayed about two weeks by independent film-maker South Vineyard Ltd.

Two sets for the film, about the life of Jesus Christ, are being constructed at the Falstone camping reserve on the shores of Lake Benmore and Elephant Rocks near Duntroon.

Other sites around New Zealand will also be used.

The Otago Daily Times was told earlier this week about 40 people had been laid off at the Falstone site because of difficulties with funding the movie as a result of the global economic crisis, but this was denied yesterday by the film's publicist Eric Malik.

Construction of the set at Elephant Rocks had not been affected.

Mr Malik said South Vineyard had adjusted its plans for a number of reasons.

Originally, the company planned to stop building the set on December 20 during the peak holiday season at Falstone when hundreds of campers arrive.

It would resume from January 5.

All would resume their duties in early January following the holiday break when the Falstone set would be completed just as filming started.

The film-makers had decided to increase the preparation time for the movie and would now begin filming two weeks later than originally planned, on February 2.

Mr Malik said the delay was due to negotiations to distribute the film, offers to prospective cast members and a threatened strike by the Screen Actors Guild.

"Several major Hollywood studios have expressed an interest in distributing Kingdom Come as a major 2010 release, with talks between distributors and film-makers progressing to negotiations," he said.

The production was also affected by negotiations between the Screen Actors Guild and studios and producers and "a negative outcome" would affect the start date.

The Los Angeles Times reported on November 23 that negotiations had not been successful and the guild was seeking strike action approval from its 120,000 members.

The dispute is over a new labour contract with a major difference over how actors should be paid for work distributed over the Internet.

Strike action, which may not be resolved until early next year, would be costly for the film industry, the newspaper said.

Mr Malik said this uncertainty, combined with interest in the film from major United States distributors, had resulted in South Vineyard deciding to increase preparation time for the film.

South Vineyard has resource consent from the Waitaki District Council to build more than 100 facades on the Falstone set and a fishing harbour, plus filming consent.

The sets recreate biblical villages in Israel, including the biblical site of Capernaum, on the shores of Galilee.

Lake Benmore was chosen because the outlook resembled the Sea of Galilee.