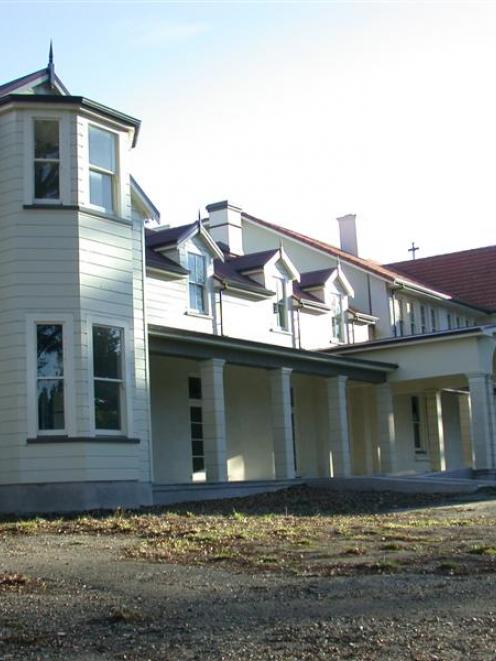 The former Teschemakers boarding school yesterday, now virtually fully restored by 3H Family after being severely damaged by fire in June 2003.Photo by David Bruce.
The dream of a Japanese businessman of creating an international centre in North Otago for health sciences, organic foods and their processing, ended when he died nearly three years ago, and now Nikken Seil is selling some of the land involved.

About 22ha just north of Oamaru, bought in 2001 to develop a $20 million business park, is on the market and sources said it was likely Teschemakers, the former Catholic girls' boarding school, plus another 500ha of farmland would also be sold.

Nikken's principal shareholder Dr Hirotomo Ochi, who died in October 2005, bought Teschemakers for about $500,000 in 2000, and from that sprang the idea of the business park and the purchase of about 500ha of farmland to produce organic foods for processing.

Dr Ochi was also the principal shareholder in food company Nikken Foods, but since his death the projects - which could have created hundreds of jobs - have languished.

"Nothing has changed, except the possibility of having Japanese enterprises and industries.

''It's given us the opportunity for a much-needed industrial area for the town," he said.

Mr McLay did not believe the involvement of Nikken Seil and its other companies would continue in North Otago.

He expected its farms and Teschemakers would be sold.

Last week, the business park site, on State Highway 1 opposite the Oamaru racecourse, was listed by Colliers International for sale by private treaty.

Nikken Seil's North Otago representative Katashi Kai confirmed it was for sale, but declined to comment on the future of Teschemakers and farmland.

Nikken Seil, which was 74% owned by Dr Ochi, owns the business park land and farms.

Teschemakers is owned by 3H Family, which was Dr Ochi's own private company.

However, it is understood other land, including Teschemakers, is also likely to be offered for sale in the future.

Mr Katashi said it had been decided to sell the business park land "in the hope some other company may buy and develop it".