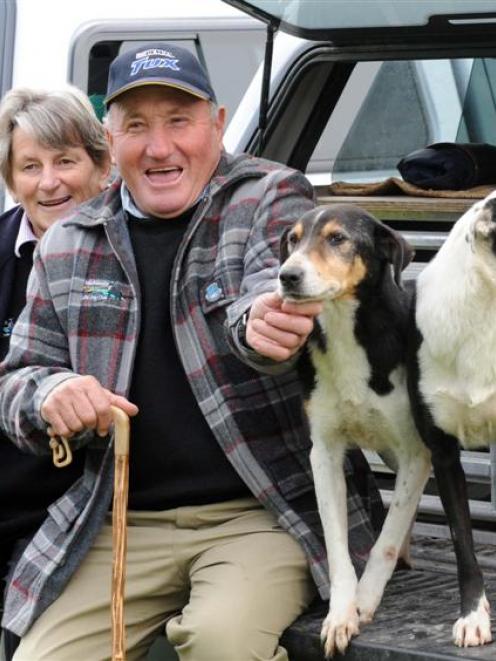 Geoff and Joyce Allison, with dogs Fay and Nell, at the South Island sheep dog trial championships. Photo by Stephen Jaquiery.
Geoff Allison has been dog-trialling for more than half a century and his passion for the sport is still as strong as ever.

Born in South Otago, Mr Allison (67) was 9 when his family shifted to South Canterbury.

He started trialling when he was 15, following in the footsteps of his father.

Now semi-retired and living on a 20ha property at Fairlie, he and his wife Joyce are attending the South Island sheep dog trial championships at Hakataramea this week.

A life member of the Mackenzie Collie Dog Club, Mr Allison qualified two dogs - Nell, who will turn 10 in December "but she's still pretty fit and well" - and 2-year-old Fay.

In 1997, Mr Allison and his dog Bruce claimed the New Zealand title in the long head and then represented New Zealand in a transtasman challenge, beating Australia. Fay is a descendant of Bruce.

Winning another national title was always something that Mr Allison strived for. He usually attended between eight and 10 trials a year.

• Whistling his dog from a wheelchair proved no barrier yesterday for Grant Calder, of Lauder Station. Mr Calder and his dog Cramp won the South Island zigzag hunt championship. Mr Calder has been in a wheelchair since a motorcycle accident on his farm in August 2004.