By Rebecca Ryan
0 Comments
Forrester Heights should not be given up for the ‘‘construction of a few mansions for rich Aucklanders’’, Friends of Oamaru Harbour co-ordinator Vicki Jayne says.

Friends of Oamaru Harbour was inviting the public to celebrate the opening of the new Lookout Point Nature Trail, which runs through the block of land at Cape Wanbrow known as Forrester Heights, on Saturday for a picnic and the opportunity to ‘‘judge the potential of the area for themselves’’, Ms Jayne said.

‘‘It would be nice to get people up there to actually have a look at the area — it’s absolutely gorgeous,’’ she said. 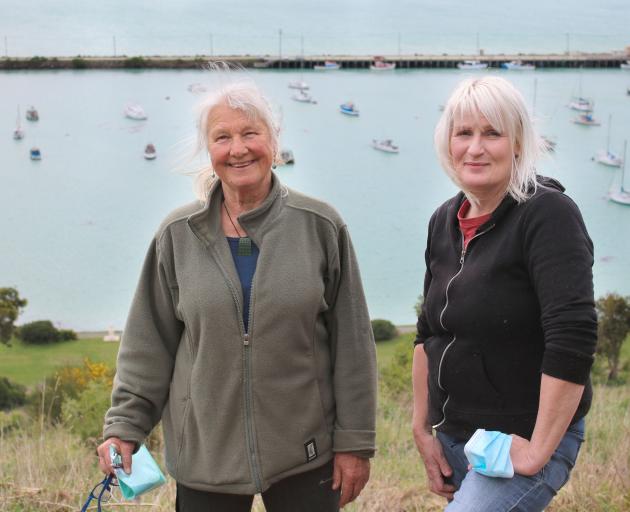 Friends of Oamaru Harbour co-ordinators Vicki Jayne (left) and Katrina Hazelhurst are inviting the community to celebrate the opening of the Lookout Point Nature Trail and discuss the future of Forrester Heights. PHOTO: KAYLA HODGE
‘‘That piece of land has been ignored and neglected since the last rather thwarted attempt to develop it, and people haven’t had a chance to look at it, to enjoy its beauty, to see its possibility.’’

The Waitaki District Council’s 2.5ha property overlooking Oamaru Harbour has a controversial history and is back in the spotlight after approaches by several parties interested in buying it for development.

Last month, councillors voted to carry out a public engagement process and ask Waitaki residents what direction the council should take and make a decision on its future ‘‘one way or the other’’. Options include doing nothing, setting aside the land as a greenspace reserve, developing it as a reserve similar to Cape Wanbrow, selling it, or seeking partners for a joint venture.

While a timeline for consultation had not yet been announced by the council, Ms Jayne said the opening of the new Lookout Point Nature Trail supported the process ‘‘by giving the public the opportunity to walk across the land and consider a different future’’.

‘‘The idea is really to get the talk going.’’

Friends of Oamaru Harbour, a group dedicated to enhancing the heritage, natural and wildlife appeal of the Oamaru Harbour area, believed the land should be a nature reserve ‘‘celebrating native bush with stunning harbour views’’.

The group’s volunteer efforts to develop the trail, which branches off the track between Test and Avon Sts, and construction of a new viewing bench highlighted the potential for a development the whole community could share, contribute to and enjoy, she said.

It was also a ‘‘great link’’ between the harbour and the Lookout Point reserve.

The picnic will be held on Saturday at noon at the new viewing point on the trail, which starts 35m up the existing South Hill Walkway’s Test St entrance.

The mayor and councillors have been invited to speak, and all attendees are encouraged to bring their own food and drink and wear face masks.