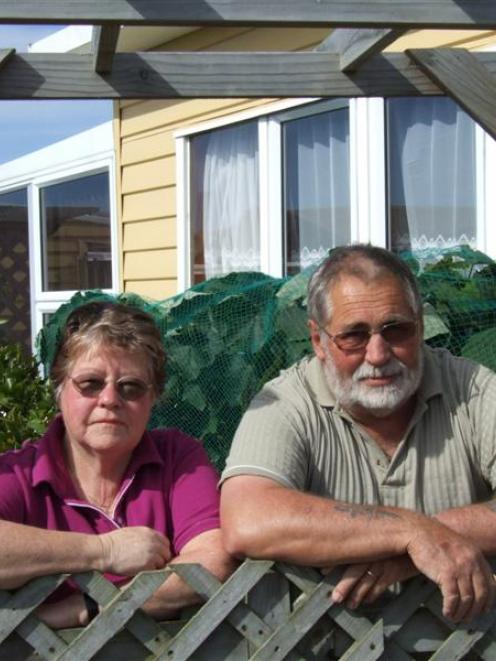 Bev and Dave Jordan (top), of the Waitaki Kaik Fishing Reserve, say the camp's possible 868% rate increase will be discussed at their annual meeting next Friday. Photo by Sally Rae.
"Thievery" is how one home owner describes the huge hike in proposed Waitaki District Council rates at two fishing camps on the south side of the Waitaki River.

"They are taking money for no good reason," Dave Jordan, of the Waitaki Kaik Fishing Reserve, said yesterday.

It was not until she had put the notice down and walked away that she realised there were more figures than that and decided to take a closer look.

Her reaction to the proposed 868% rate increase? "Oh my God", she said.

The rates bills for both the Kaik camp and the Waitaki Bridge camp are divided between the houses.

Until now, one rate and uniform annual general charge had been levied separately to each camp's organisation.

That organisation then divided the rate equally among the home-owners.

The council is proposing that, from the next financial year, each home at the camps pays a uniform annual general charge and ward rate.

It was the topic of conversation around the Kaik camp, which has 45 homes, and it would be discussed at the camp's annual meeting on Good Friday.

"Everybody's still in shock at the moment. Nobody's quite sure what to do and where to go from here," she said.

Mr and Mrs Jordan, who are in their 60s, said the camp received no services from the Waitaki District Council.

The camp was on Department of Conservation reserve land, home owners used bore water, had their own septic tanks and looked after their own rubbish, internal roading and grounds.

People came to go fishing, not use facilities in Oamaru like the Waitaki Aquatic Centre or the North Otago Museum, Mrs Jordan said.

She was also concerned that as individual rate demands were not sent out, that could leave the committee liable.

If some did not pay, it could make it "interesting".

Some people would be "really struggling" to pay, she said.

Mr Jordan wanted the council to "have a decent look" at the proposal and implored it to consult those affected.

Another Kaik resident, retired teacher Waiata Dawn Davies (83) agreed the camp got "nothing" from the council.

"If we get a pot-hole we do it ourselves. We don't mind having fair rates, but this is ridiculous."

Mrs Davies - who described the camp as "like going to heaven without having to die" - said an increase in rates would mean she would not be able to go and do things she liked doing.

He was concerned about the lack of consultation and also the lack of services the council provided.

A submission from the camp was already being prepared and he expected the issue would be thrashed out over Easter.