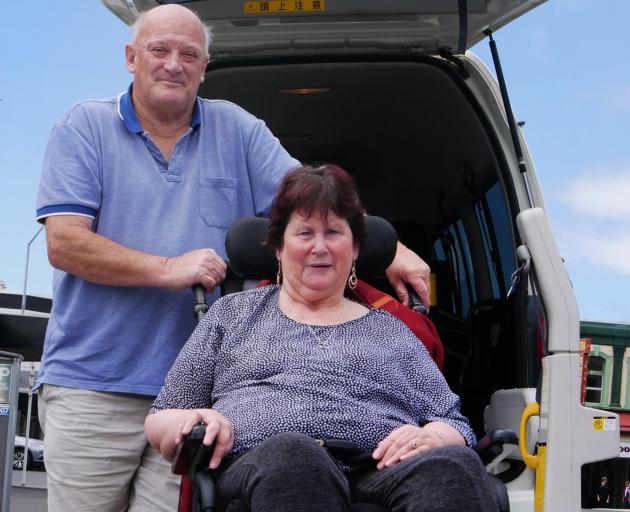 Ian and Marilyn Slaven say Oamaru’s "rough" roads have a bad impact on their outings. PHOTO: RUBY HEYWARD
The state of Oamaru’s roads is affecting a terminally ill woman’s mobility and enjoyment of her home town.

Last year the council was given a provisional estimate of the funding it would receive from the Waka Kotahi NZ Transport Agency which was $10million short of what it needed.

The roads were already having an effect on Ian and Marilyn Slaven, whose outings together were being affected by "rough" roads.

Mr Slaven often took Mrs Slaven, who is terminally ill and used a wheelchair, out for drives around Oamaru.

After the transport agency lobbied the Government to make a greater investment in the country’s roads the council was allocated another $6million in funding.

The council initially asked for $38million, but was given $34.5 million, which did not account for project inflation over the coming years, Mr Harrison said.

While road safety would take precedence, the council would prioritise what roadwork it did and the ways it did it, he said.

The council would strive to maintain the roading infrastructure while providing the "best level of service for the majority of users for the longest period of time".

"It will have an impact on people eventually," Mr Harrison said.

Mr and Mrs Slaven travelled in a van which enabled Mrs Slaven to sit in her wheelchair in the vehicle’s rear, and she was often "tossed" around by potholes and " rough" roads despite being securely strapped in.

"It just throws her around. It’s blinking rough — she’s sick of it," he said.

She often wondered whether going out was worth it.

Mr Slaven said Eden St was one of the worst roads thanks to a particularly deep pothole across from Central Medical.

The couple also had difficulty with some disability parking spaces, such as the park in Tees St, which made it difficult for Mrs Slaven to disembark.

Mr Harrison said council issues on Eden St were suspected to be part of a wider issue which was under investigation and repairs were expected to be made on Ardgowan Rd.

The transport agency was responsible for repairing Thames St/State Highway 1 and had repairs planned this year.

Mr Harrison encouraged people who have identified issues to ring the council.