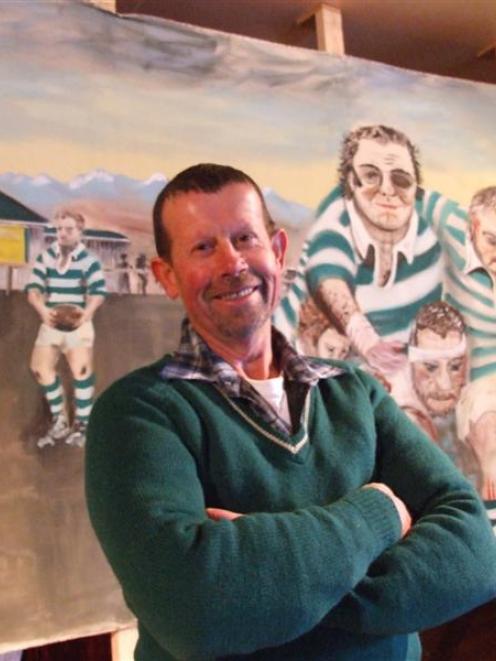 While those attending the club's reunion celebrations were busy watching rugby at the Enfield Domain on Saturday afternoon, Mr Kingan was installing his secret project in the Enfield Hall - a 6m mural depicting the club's halcyon days.

Rolled out across the stage, the work provided a backdrop for the social function in the hall that night.

The reunion marked 50 years since the club was resurrected.

It later amalgamated in the 1980s with nearby clubs, with most in the Enfield area now playing for Valley.

Mr Kingan finished playing for Enfield in the 1970s.

"I was never a good player but I loved the social side of it. I was a winger, but I didn't score many tries," he said.

He has been interested in art since he was a child and hatched a plan to create a mural which showed players wearing the Enfield colours of green and white, at the Enfield Domain, with the "Tin Shed" pavilion in the background.

Remembering the cold, wintry days playing at the domain when it was nearly dark when the game finished, he tried to depict "a real cold sky" and also tried to make the players "quite ugly", although he quickly added that any resemblance to real players was coincidental.

The mural was auctioned for $600 on Saturday night.