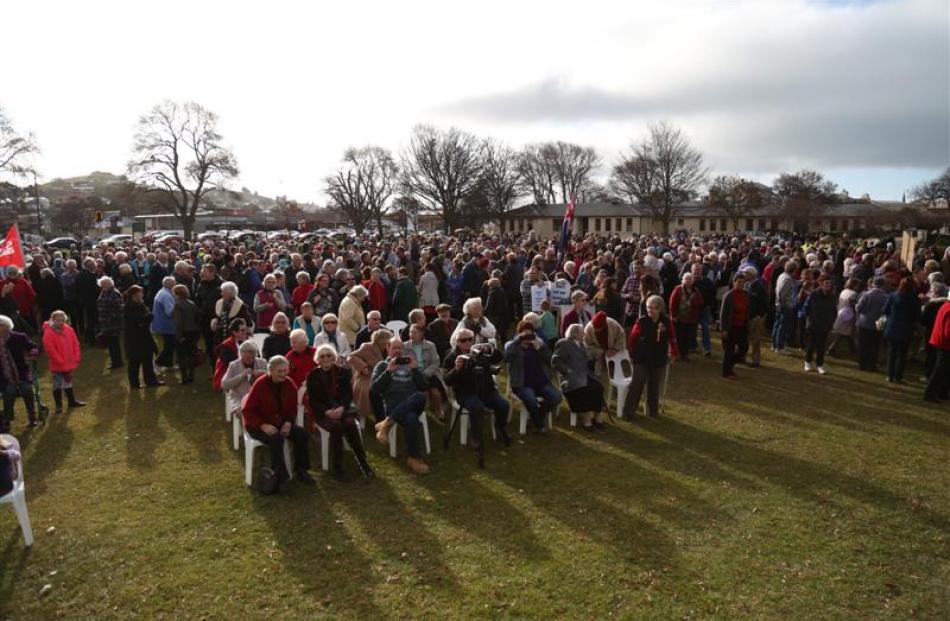 About 2500 people yesterday gathered in Takaro Park, in Oamaru, protesting against proposed cuts to funding for Oamaru Hospital. Photos by Rebecca Ryan. 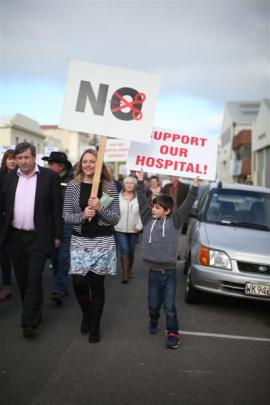 The Oamaru community sent a clear message to the SDHB yesterday by turning out in force for a protest march opposing any cuts to funding for the Oamaru Hospital and its health services.

A crowd estimated at 2400 and carrying placards marched from the Oamaru Farmers' Market car park to Takaro Park where they were met by a further 100 supporters.

The Southern District Health Board (SDHB) is trying to cut 5% from its contract with Waitaki District Health Services (WDHS), the council owned company that owns and operates Oamaru Hospital and provides health services in the district.

Event organiser Waitaki district councillor Melanie Tavendale said she wanted to send a clear message to the Southern District Health Board that the Oamaru community valued its health services and would fight to retain them.

Almost 20 years ago, the Oamaru community fought to retain the hospital and yesterday they cemented that support, she said.

In 2014, the Oamaru Hospital's emergency department had more than 7600 attendances. The SDHB is proposing to slash that service to just 3000.

''Our A and E department is a well utilised service that we can not afford to lose funding for,'' she said.

''If families were forced to travel elsewhere, it would add both cost and stress to an already testing time,'' she said.

''Our maternity services are an absolute asset to our district and if we want to attract more families these services are vital.''

Oamaru's aged care services also needed to be extended rather than cut, she said.

Guest speaker WDHS deputy chairman Ken Scott said it was the most critical issue the company had faced.

A 5% cut would result in a loss of $500,000 in funding and, in turn, a reduction of the number of hospital beds available.

''Over a period of a year, some hundreds of people would have to be transported to Dunedin at enormous costs,'' he said.

The Oamaru Hospital serviced a large area - as far as the Lindis Pass and Lake Ohau.

''There's no way in the world the board is prepared to accept the cuts that would be so disastrous to so many of our people,'' Mr Scott said.

''All we are really asking for is our share of the funds that the Government makes available for our people - it's as simple as that.''

Waitaki Mayor Gary Kircher said it was ''a really humbling moment'' to see so many people turn out in support yesterday afternoon.

''Instead of grasping the nettle and dealing with some of the real issues about inefficiency, they are actually looking at our hospital which is already running efficiently ... it's not good enough.''

National Party Waitaki MP Jacqui Dean did not address the crowd, as planned, after Dunedin North MP Dr David Clark was denied speaking rights by organisers of the event who did not want to turn the rally into a political event.

Mr Kircher said the focus was the Southern District Health Board and its funding priorities.

No SDHB representatives were present at the protest.

''There's a very strong message being sent today - we won't accept cuts ... we've put a line in the sand.''