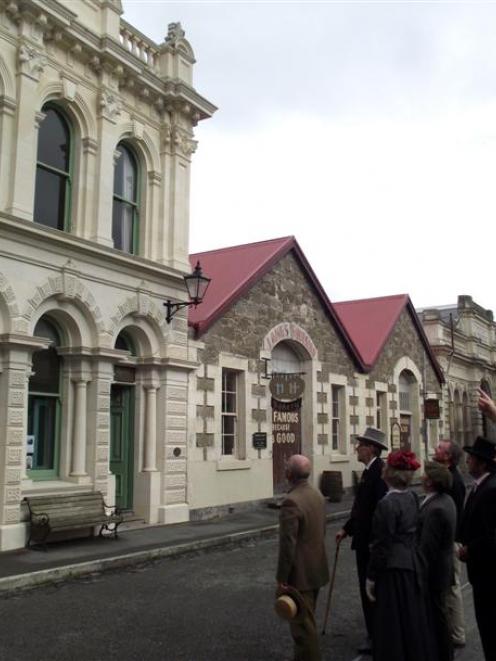 Oamaru Whitestone Civic Trust chairman Phil Hope (right) points out features of historic properties in Harbour St, which may cost more to insure, to trust board members in 2011. Photo by David Bruce.
Phil Hope, the senior guardian of Oamaru's Victorian precinct, has grave fears for the North Otago town if the Government pushes ahead with a proposed 15-year deadline for strengthening buildings against earthquake.

The exception would be features such as parapets and chimneys, which caused several deaths and multiple injuries in the Christchurch earthquakes.

Oamaru is believed to have the largest collection of category 1 and category 2-listed heritage buildings of any provincial town in New Zealand.

The town's Victorian precinct, comprising buildings constructed of Oamaru stone between the mid-1860s and mid-1880s, is one of New Zealand's most impressive streetscapes and a major tourist attraction.

The easily carved stone has also been used to create elaborate neo-classical style buildings in the main street, including the Forrester Gallery, Oamaru Opera House and North Otago Museum.

Mr Hope said imposing a 15-year timeframe to strengthen buildings would have a massive effect on the town, as it would lead to demolition by neglect.

The trust, which owns 17 buildings, had already brought several of these up to the 33% strengthening standard, but assess-ments alone had cost between $5000 and $10,000 on buildings still to be strengthened.

Mr Hope said the trust relied on grants and rentals from its buildings, which returned a modest $40 to $45 a sq m. Retailers in Auckland's Queen St pay upwards of $2000 a sq m for prime space.

''We are not opposed to the notion of strengthening. We think 33% is a good basis to aim for. It's the timeframe to achieve it.

''If the country, after 30 or 35 years, has got most, if not all, of its unreinforced masonry buildings up to 33% then that will be a wonderful result,'' he said.