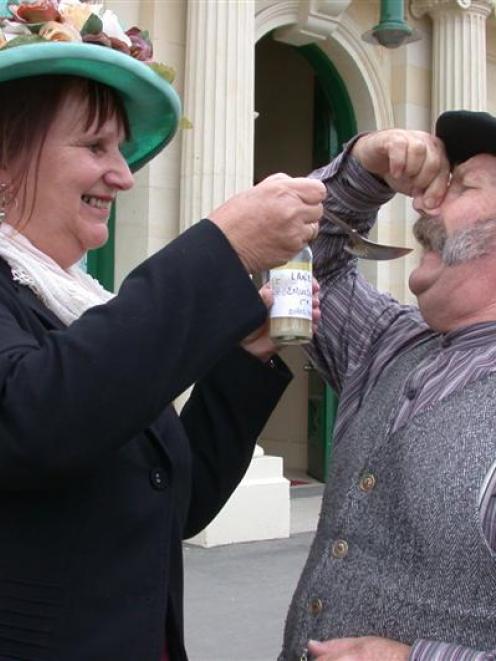 Oamaru's "Victorian domestic goddess", Marise Martin, attempts to dose her husband Graeme yesterday with the concoction she invented to win a competition to re-create the smell of Lane's Emulsion, run by the North Otago Museum. Photo by David Bruce
Who else but Oamaru's "Victorian domestic goddess" could be expected to come up with the winning recipe to re-create the smell of the very Victorian tonic, Lane's Emulsion?

The goddess' alter ego, Marise Martin, was yesterday crowned the winner of the North Otago Museum competition which asked people to re-create the smell of Lane's Emulsion, invented in 1898 by Oamaru pharmacist Edward Lane, as part of an exhibit planned later this year.

The goddess has starred at Oamaru's Victorian Heritage Celebrations, passing on her knowledge of Victorian household customs, including in 2008 giving advice on "how to take a husband".

"It would be a damn poor show if the Victorian domestic goddess did not enter the [Lane's Emulsion] contest," she said yesterday after being crowned the winner.

Museum curator Chloe Searle said it was not easy for the judges to decide on the winner.

"The unique smell of Lane's Emulsion has proven to be hard to replicate. I am confident that, with a bit of fine tuning, the winning recipe will give museum visitors a good idea of what Lane's smelt like," she said.

Like her "how to take a husband" recipe - the intricacies of Victorian courtship, a peek into a lady's boudoir and discovering what a man really wants - the goddess was prepared to reveal her successful recipe re-creating Lane's Emulsion.

But her husband Graeme was not so keen on tasting it.

During a photo session with the Otago Daily Times, he kept bobbing and weaving every time any of the mixture got close to his mouth at the end of a spoon.

Mrs Martin said the whole family was involved with the experiments. Once the recipe was settled, they each had a little bit on the tip of their finger to taste. One "dipple" was enough.

Mrs Martin was not a Lane's Emulsion child. She knew about the tonic as part of Oamaru's history, but never tasted it.