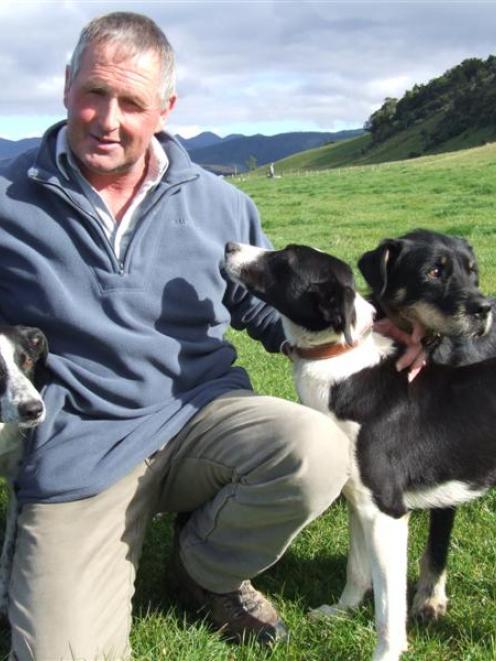 Mr Sellars, who admitted to usually having "different" names, has a young huntaway called Coat.

The history of her unusual moniker went back to when she was a pup barking in the pup pen.

The man who bred her got his vest and gave her a smack over the nose with it.

Mr Sellars did not think Vest sounded very good as a dog's name, so he called her Coat.

And just to provide a little entertainment, he has used the commands "overcoat", "vest", and "raincoat" to direct her, instead of more traditional directives.

"People get a laugh out of it," he said.

Coat was young, at 2, but she was doing well.

"She's just so loyal and very, very good at work."

Coat was absent from the Oamaru Collie Club's 60th trials at Waianakarua yesterday, although Mr Sellars (48) was campaigning some of his other dogs.

He farmed an 820ha property at Owaka, and the steep hill country was ideal for dogs, particularly for breaking them in.

Trialling was an extension of his daily work.

"Get them going good for work and they are good enough for this," he said.

He enjoyed putting his dogs to the test and seeing how they went at trials.

The highlight was meeting fellow triallists from all over New Zealand.

It was his first trip to the Oamaru Collie Club's trials which continue today at the McMillan family's property at Waianakarua.

He had four dogs qualify for the New Zealand championships in Hawkes Bay in June, but he will not be making the trip north to Te Aute.

He will instead concentrate on the South Island championships in Geraldine this month.

The ultimate aim for any triallist was to win a New Zealand title and, as next year's New Zealand championships were being held in Gore - only about an hour from his home - he would be trying hard next season to qualify.

The Oamaru Collie Club will be hosting the North Otago centre championships on Tuesday and Wednesday.