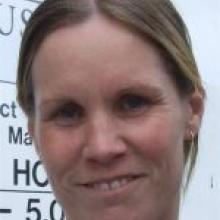 Debbie Devon
Drink-driving has to be stopped, a North Otago mother whose 15-year-old daughter died in a crash says.

Debbie Devon said she could understand why a two-year jail sentence was imposed this week on 19-year-old Charlene Barnes, who crashed her car last year causing the death of her best friend and injuring two others.

Barnes was sentenced by Judge Stephen O'Driscoll in the Oamaru District Court on Wednesday.

"At the end of the day, she did kill somebody. It's going to be really horrible [for her] but I guess people have to learn. You just can't do this," Ms Devon said yesterday.

Casey Devon was killed in 2007 in a crash near the State Highway 1 Waitaki River bridge.

Both her mother and brother talk from experience about the consequences of drink-driving, in a hard-hitting DVD that is played to drink-drivers before sentencing in Oamaru.

Ms Devon said she was very supportive of initiatives in the Waitaki district aimed at addressing alcohol issues, and Waitaki community safety officer Alison Banks was doing "a great job".

The Devons last week attended a public forum in Oamaru, at which former All Black Norm Hewitt was guest speaker.

While it was hard, because photographs of local crash victims were shown, it was nice to see they had not been forgotten and that work was being done towards stopping it happening, Ms Devon said.

She recalled feeling "gutted" when she heard of the crash that claimed the life of Barnes' friend, Natasha Maindonald.

'Young people had to be shown what would happen if they got behind the wheel of a car after drinking.

"They think they can do it and get away with it, and nothing is going to happen to them," she said.

Waitaki District Youth Council chairwoman Rhiannon McLean (18), giving her personal view and not speaking on behalf of the youth council, said drink-driving was "quite a big deal" in Oamaru at the moment, especially since the death of Miss Maindonald.

Asked whether the two-year sentence would be a deterrent to young people, Miss McLean said she would "like to say yes" but history showed people still drank alcohol and then drove, even though they knew the consequences.

"Hopefully, it will act as a deterrent for young people when they see the consequences are you can kill your mates and possibly go to jail for it," she said.

A presentation at Waitaki Girls High School last week, during which Mr Hewitt spoke, had girls in tears.

Many young people did not think about what happened when someone died and how it affected not only their family but also the community, Miss McLean said.

That night, after an annual interschool first XV rugby game, young people were "really thinking twice" about how much they were drinking, she said.

Initiatives in the district continue with a workshop on strengthening community action on alcohol, in Oamaru on July 22.

The Waitaki District Council community safety and alcohol harm reduction programme, in conjunction with the Alcohol Advisory Council of New Zealand, is hosting the workshop, which aims to support those working to reduce alcohol-related harm.