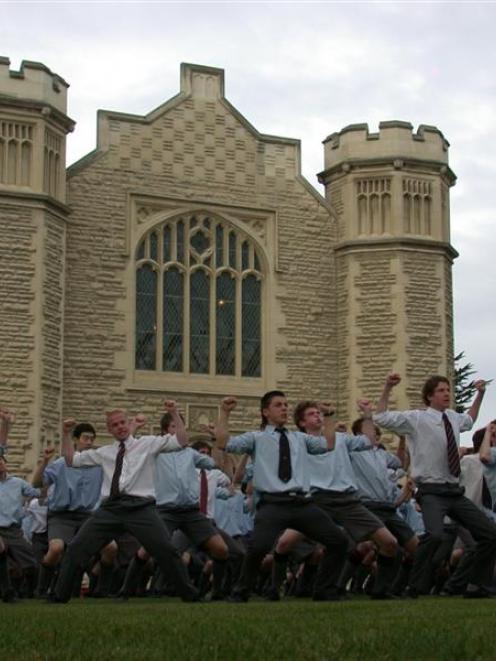 About 600 former staff and pupils attended the anniversary assembly, which was held in the Hall of Memories.

It was followed by a haka performed by senior pupils in the quadrangle outside the hall, a group photograph, and a conversazione last night in a giant marquee erected for the celebrations.

But the highlight for many was a narrow 16-13 win over arch-rival St Kevins College in the annual interschool rugby clash at Whitestone Contracting Stadium yesterday afternoon.

Dr Baker said Waitaki was an outstanding school for boys, which was recognised nationally.

An institution was about achievements, but it was also about relationships.

"The values of this school are ultimately about how we relate to each other as people, how we promote mateship, tolerance, understanding and decency and use those qualities to build an enduring sense of community," he said.

The oldest former pupil attending the anniversary celebrations, North Otago farmer Syd Hurst, related to pupils his experiences while he was at Waitaki Boys from 1931 to 1933.

Mr Hurst, who is "just on 90" years of age, recalled travelling each day to school by train, arriving just in time for assembly.

The first week of school was always "barracks week" - which concluded with a mock battle using blank ammunition against St Kevins - when pupils were taught military values and "to keep in step with each other and society".

"It was only years later that I realised how important that military training was," he said.

Discipline was paramount. Every teacher and even the head prefect had the right to cane pupils.

In those days, pupils had to swim in the school pool without swimming togs and Dr Hurst said it was plain to see who had been in trouble.

A former pupil from 1959 to 1965, Prof Malcolm Grant, is now president provost at University College in London.

He said he came to the anniversary celebrations because of the profound influence the school had had on his life.

"In our own way, we remember not only what the school has done but also what it has done for us as individuals.

It is a chance for us to say thank you to the school and staff for what we have done subsequently in our lives," he said.