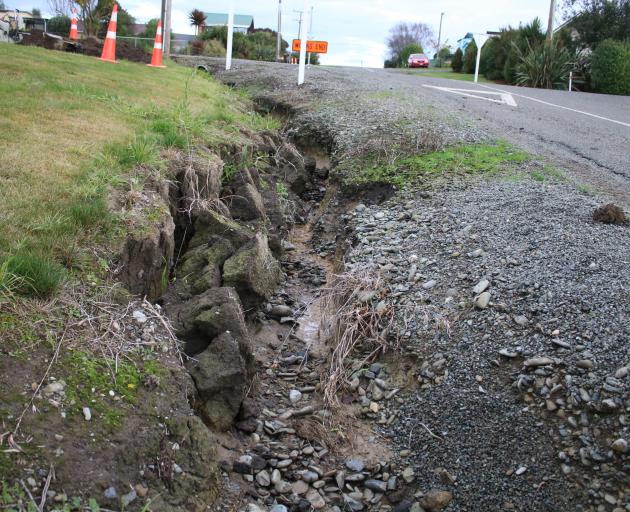 Discussions about solutions for the Kakanui stormwater drainage system have started. PHOTO: KAYLA HODGE
Work to find a solution to Kakanui’s stormwater problems has begun, but any action is at least several months away.

Residents had complained that ditches were blocked, covered in silt and the new system created risks, reducing off-street parking and pedestrian space.

The previous system was designed using broken flow for water to run through vegetation or gravel swales.

Council roading manager Mike Harrison said issues had been ‘‘bubbling along for some time’’ and his team was discussing viable solutions.

Those options included separating the stormwater and drainage systems.

‘‘Ideally, I’d really like to get some work started as quickly as I can, but I want to make sure that what we do at the moment is going to be beneficial for the long term, rather than just doing something that’s quick and easy,’’ Mr Harrison said.

‘‘We really want to get back where we were before.’’

Community discussions were ongoing and there would be consulted about the final decision.

No work could start until Kakanui’s broadband installation was finished, as contractors would be ‘‘working on top of each other’’.

At a recent council assets committee meeting, councillors said there appeared to be a lack of urgency to correct the issue.

Deputy mayor and Kakanui resident Melanie Tavendale said frustration was growing in the community, as there were concerns about safety and a lack of consultation.

Cr Tavendale said she, too, had been unaware the work was scheduled until it happened outside her home.

‘‘We’ve created a huge number of issues here and we’ve exhausted this conversation with the community over and over again,’’ she said.

‘‘We’re driving the problem, so we need to drive the fix.’’

Cr Guy Percival said the council made lots of promises to fix the Kakanui stormwater system issues, but had delivered none.