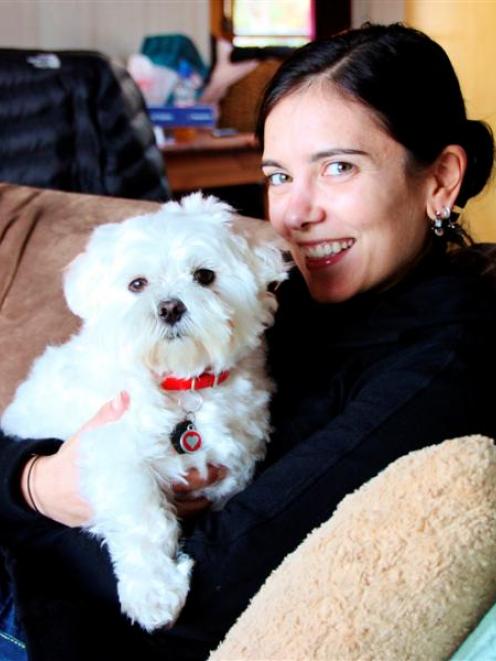 Belinda McBride with her dog, Raffy. Photo supplied.
Obtaining orders to have a dangerous dog destroyed has cost the Queenstown Lakes District Council $55,000 in legal fees.

After an investigation, Mr Evans' pit bull, Kaya, was impounded and given a ''menacing'' classification, meaning the dog had to be muzzled any time it left the owner's property, Mr Webster said. Then, on February 7, Ms. McBride was walking Raffy on a leash in Lomond Cres when the pit bull attacked again.

Ms. McBride said Raffy was taken from her grip by Kaya and a tussle continued on the steps of her property. The pit bull was not muzzled or enclosed, as Mr Evans' property did not have a fully secured yard, she said.

''This dog had to be rushed to the vet. It had serious injuries, bites, tears and was on a drip,'' Mr Webster said.

When contacted yesterday, Ms.McBride did not wish to comment further.

Mr Evans could not be contacted last night.

The council and Lakes Environmental, after finding Kaya a serious threat, had asked Mr Evans ''numerous times'' to have his dog destroyed, but he refused to do so and was ''adamant it wasn't his fault'', Mr Webster said.

Mr Evans was prosecuted in the Queenstown District Court in August this year when Judge Jan-Marie Doogue ordered the dog be destroyed and the owner fined $550 and ordered to pay a $462 vet's bill.

Mr Evans appealed, and on November 8 Justice Forrest Miller in the High Court at Invercargill found no exceptional circumstances why the dog should not be destroyed.

Council regulatory and corporate services manager Roger Taylor confirmed at the council's finance and corporate meeting yesterday the case cost the ratepayers $55,000, most of which went on legal fees.

''It was a very expensive exercise. The positive is it resulted in a dangerous dog being removed from the community."

Four dog attacks on people were reported in the district this year, down from 15 in 2011.

There were 12 dog-on-dog attacks this year and 11 dog attacks on other animals.