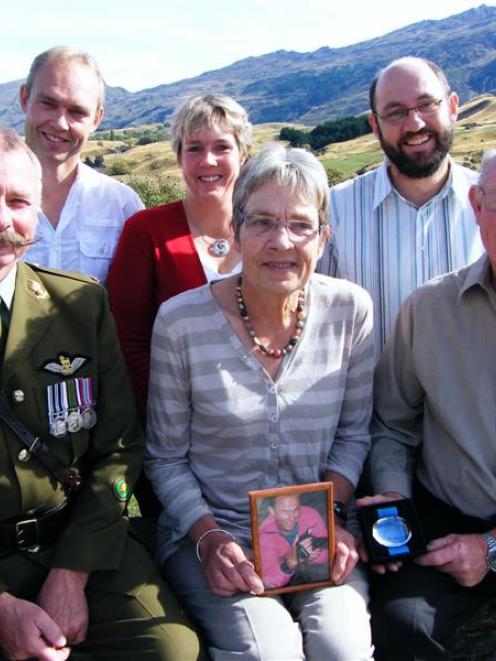 Mairi Speight and husband, David (right), with a picture of their son, Nicolas, and the Dag Hammarskjold Medal, which was awarded by Major Peter Aymes (left) on Saturday.With them are Nicolas' siblings (from back left) Jeremy Speight, Nadia Wright and Simon Speight. Photo by James Beech.
Arrowtown humanitarian aid worker Nicolas Geoffrey Speight was posthumously honoured in an informal outdoor ceremony at his parents' home on Saturday for his services to peace.

He was working as a programme manager in a United Nations-contracted land-mine clearing operation.

Not many days went by when he did not think about his son, he said.

Mairi Speight said she had mixed feelings about the medal.

Nicolas was humble and would have thought others should have been recognised for their humanitarian work before him, she said.

Of 1500 Dag Hammarskjold medals awarded worldwide to the families of civilian and military personnel who died in the service of the UN, only seven have been to New Zealanders.