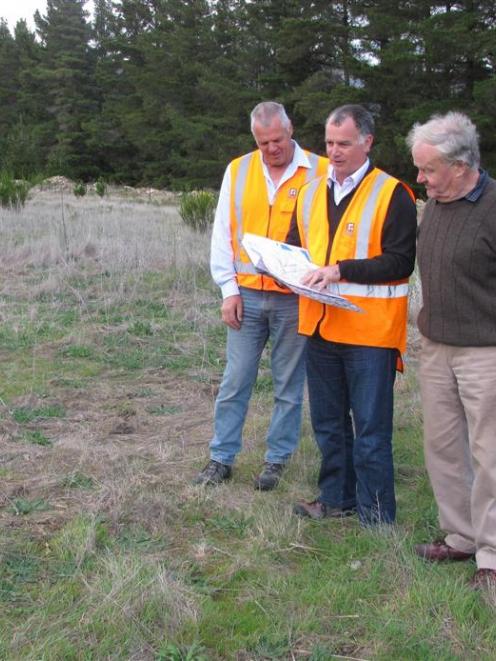 Fulton Hogan industries manager Peter Reid (left) and regional manager Alan Peacock (centre, both of Alexandra), show Luggate Community Association president Geoff Taylor around the site earmarked for a proposed sludge-drying facility near Luggate yesterday. Photo by Lucy Ibbotson.
Concerns linger over a proposed sludge-drying facility near Luggate, with more assurances being sought from those behind the project.

At a Luggate Community Association meeting on Thursday evening, residents said inadequate information had been provided on Project Groundswell - a proposal to build a sludge-drying facility on the Luggate-Tarras highway and apply the fertiliser produced from it to neighbouring land.

Project partners Fulton Hogan and the Queenstown Lakes District Council needed to ''find the right answers'' to a series of questions posed by the association's subcommittee tasked with investigating the proposal, member Cyril Coombe said.

The subcommittee has met weekly to research the European solar-drying process that would be used at the Luggate facility, the first of its kind in New Zealand, and it reported its initial findings to this week's meeting.

It said there was a ''strong desire'' to ensure alternative site options on council or Fulton Hogan land had been independently evaluated, as the research indicated all other similar facilities were located next to the sewage treatment plant. The Project Groundswell facility would be 6km away from Wanaka's Project Pure treatment plant, from which the sludge would be carted.

''It's not guaranteed that we're going to get the dehydration ... I think they're going to have real problems in the winter,'' subcommittee member Judy Thompson said.

''Overall, the principle and the dehydrating, it sounds really good, but we're just wanting to check it's going to perform how they expect it to.''

The implications of applying the dried material to farmland was still to be researched by the group.

An independent evaluation of the entire proposal was necessary, residents agreed.

QLDC senior communications adviser Michele Poole said the council was talking to various organisations to source the information requested by the community association, including the Medical Officer of Health and other councils regarding their own application of biosolids to land.

Project Groundswell would manufacture a grade A biosolid that, under national guidelines for the safe application of biosolids to land, was considered ''safe to be handled'' and pathogen-free, she said.

The project's resource consent would stipulate the material could not be applied to land if it was not grade A standard.

''There's never any absolute absence of risk but, in terms of risk reduction, then the grade A is the best you can get,'' Dr Horswell said.

''I am comfortable with what they're [Project Groundswell] doing in terms of the grade A and the process works well. To the best of our science knowledge, the risks are minimal.''

She acknowledged the use of biosolids had long been a contentious issue.

''But we have to look at it in the context of sustainability and what else do we do with it? We landfill it? Well, that's not sustainable; we're creating greenhouse gases and leachates etc ... if you look at in terms of sustainable living, the most sensible thing to do is put it on land.

''Scientifically, the risk is the same with any other compost, but social-culturally it is viewed differently and those things have to be talked about until the community's comfortable with it.''

Fulton Hogan Central Otago regional manager Alan Peacock confirmed the company had commercial arrangements with adjacent landowners for the use of the dried material, but would not disclose any further details.

The resource consent applications for Project Groundswell were likely to be lodged within a month, he said.