'Cheaper bridge' may be required 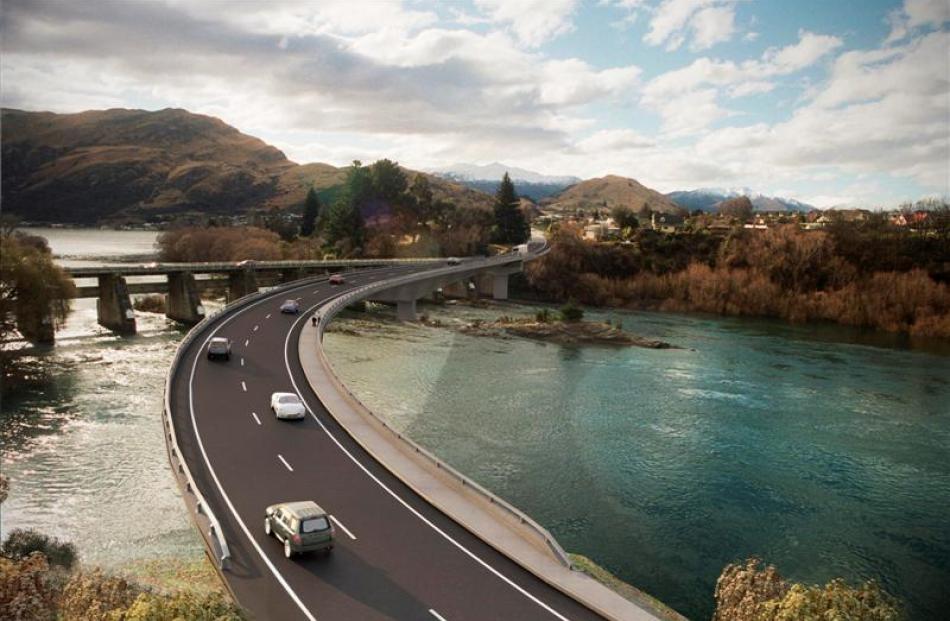 An artist's impression of a possible solution to a Kawarau Falls replacement bridge, which links Kelvin Heights and Frankton via State Highway 6. The existing bridge is at the left of the picture. Image from NZTA.

The Queenstown Lakes District Council will recommend the New Zealand Transport Agency (NZTA) continue design development for a new two-lane, two-way bridge at Kawarau Falls, but acknowledge a possible need to adopt a "cheaper bridge type" at its meeting on Tuesday.

In a report to the council, transport manager Denis Mander said the NZTA was seeking council guidance for its design process of the replacement bridge, which in 2006 was estimated to cost $17 million, to link Kelvin Heights and Frankton via State Highway 6.

The council had been seeking a commitment from the NZTA and its predecessors for several years for a new bridge, based on the "deficiencies of the existing one-lane bridge" which were "incongruous with a growing urban area".

The agency had started the development of a process which would produce a "specimen design", but it needed to be emphasised that did not imply an NZTA commitment to the bridge construction was imminent, Mr Mander said.

"Rather, it will enable NZTA to be in a position to progress the project relatively quickly ...

when the project meets its funding criteria requirements."

Several options had been considered and discarded through the years, the preferred option being to build a two-lane, two-way bridge immediately downstream of the existing bridge.

The proposed bridge would be roughly the same height as the existing bridge and downstream of the heritage bridge.

"The NZTA is pushing hard for the completion of the specimen design for the bridge and for the lodging of consent applications by the end of this year.

"This is important in that the project outputs will include a good definition of the bridge proposal, a cost of works and an evaluation of project feasibility."

Mr Mander said making the decision to build the bridge would present "considerable challenges", particularly given the estimated price tag.

Mr Mander warned in his report the Frankton bridge would be competing for funding with similarly priced projects in more congested parts of New Zealand, and the QLDC would have to "develop robust competitive arguments for the bridge in terms of the NZTA project assessment criteria".