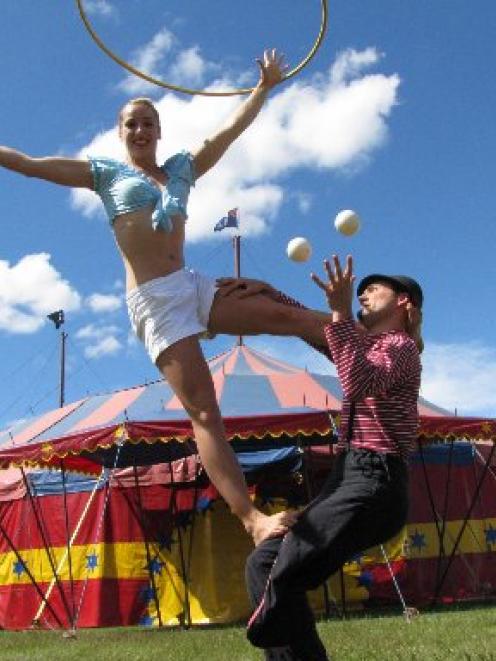 Cadet performers Olivia Watts (20), an aerial and hula hoop artist, and juggler Pascal Haering (33) have been making the most of their transfers to Melbourne's National Institute of Circus Arts (Nica) after the Christchurch earthquakes.

Mr Haering, formerly from Switzerland, studied physics and worked in the electronics industry before he "ran away to join the circus" and, eventually, came to New Zealand.

He had completed his first year at Circo Arts and when the earthquakes hit was prevented from doing his second year.

Circo Arts struck an agreement with Nica to transfer their second-year students, but cancelled the first- and third-year courses.

The building their classes were taught in still stands but there is debate over whether it will be repaired or torn down, they said.

Both performers said the experience had been "awesome" and they were grateful for the chance to attend the school. Ms Watts intends to return to complete her three-year degree this year.

"You have to audition, and a lot audition and don't make it. They are quite strict. If you have a gym background, it helps," Ms Watts said.

Mr Haering agreed. "It was a good opportunity that came from a very bad situation for us."

Both love the travelling circus lifestyle and the friends they have made on the road.

Circus Aotearoa is a human-only performance production company based in Raglan and tours for six months of each year.

It was set up by long-time circus performers Damian Gordon and his wife Irene Goed, of Austria, about four years ago.

Mr Gordon said while the school's future was in limbo, the company was happy to pick up cadets and help train them.

Wanaka was the first stop on the circus' schedule. Its last Wanaka show was staged on Sunday and it is now off to Queenstown for shows on January 6-8 before moving to Gore (January 13-15), Invercargill (January 20-22), Te Anau (January 28-29) and Alexandra (February 3-5).