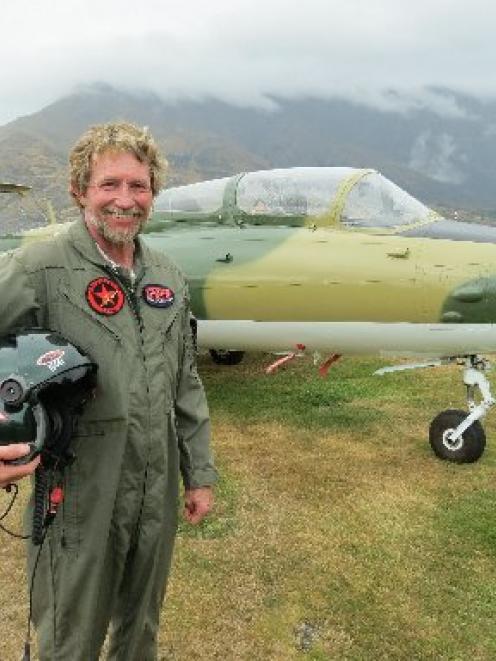 Double X Aviation co-owner and pilot Peter Meadows, of Queenstown, beside his Aero L-29 Delfin military jet aircraft, newly based at the Wakatipu Aero Club, Frankton. Photo by James Beech.
A rare Cold War bird of prey from Czechoslovakia has nested half a world away, in Queenstown.

The camouflage painted Aero L-29 Delfin military jet aircraft, with a red Soviet star on its tail, is a striking sight in the fleet of white private civilian fixed-wing propeller planes also parked at the Wakatipu Aero Club, Frankton.

It sits there like a wolf in a flock of sheep.

The aircraft is the pride and joy of Peter Meadows, a pilot of 30 years, who moved the jet with his wife Brenda and ''New Zealand's first certificated adventure aviation business'' to the Lakes district from the Bay of Plenty. He has been busy setting up shop in Queenstown since late November.

''The jet's like a big hair-dryer, with seven great big flamethrowers giving that thrust.''

The company he co-owns, Double X Aviation, had in its ranks a Soviet trainer Yakovlev Yak-52, a North American AT-6 Texan or Harvard, and a Boeing Stearman biplane for scenic thrill rides.

''But we felt we needed jet aircraft to offer something unique to visitors to New Zealand and the public,'' he said.

The two-seater L-29 was one of 3000 trainer-light attack fighters built for Warsaw Pact countries between 1963 and 1974.

''ZKJET'' was for sale in the United States in 2012 and it was perfect for their ambitions, Mr Meadows said.

''It looked the part; what you see is how we bought it and we got a spare engine with it.''

The jet was dismantled for shipping, then reassembled over several weeks in New Zealand, with all parts checked and recertified to Civil Aviation Authority standards.

It now sees action when Mr Meadows takes clients on a whirlwind tour of the Wakatipu basin, cruising at 500kmh with the occupants feeling up to 4G in the cockpit.

Wives, daughters and girlfriends bought most gift vouchers for ZKJET flights, as it was something original to give to the man who had everything, he said.

American commercial and aerobatics pilot Mike Mangold will test the mettle of the L-29 when the three-time Red Bull World Air Race champion sits in its cockpit for the jet race of the Warbirds Over Wanaka International Airshow at Easter.