Repairs will be needed to fix cracks and leaks found in two bridges linking Queenstown with the outside world. 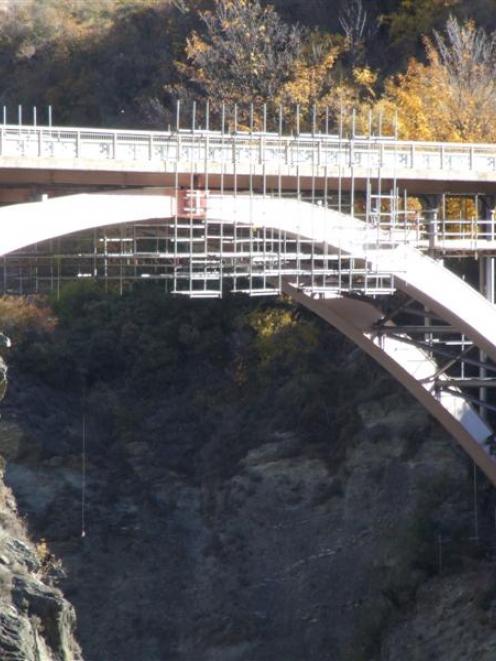 Cracks have been discovered under the Kawarau Bridge, on State Highway 6 near A.J. Hackett Bungy. Photo by Chris Morris.
Contractors undertaking a $700,000 earthquake retrofit on the Kawarau bridge found cracks up to 50mm long in welds and joins under the structure, it was revealed yesterday.

And a member of the public alerted the Queenstown Lakes District Council on Saturday afternoon after spotting wastewater leaking from a service duct running through the centre of the Shotover bridge.

Both bridges, carrying traffic using State Highway 6 over the Shotover and Kawarau Rivers, are part of Transit New Zealand's national asset network, although water and wastewater pipes running through the Shotover bridge are the responsibility of the QLDC.

Yesterday, Transit regional network manager Murray Clarke, of Dunedin, said the cracks under the Kawarau bridge were believed to have been caused by vibrations from heavy traffic crossing the structure over many years.

The steel arch bridge was built in 1963, but it was not lear exactly when the cracking had occurred, he said.

Monitoring equipment would be installed while structural engineers examined the bridge's original plans, before any decision was made about how best to repair the damage, he said.

The work was likely to involve additional strengthening work or modifications to allow the bridge
greater flexibility.

Despite the cracking, there was no evidence the bridges were suddenly deteriorating, he said.

''There's nothing to be alarmed about.''

However, additional speed restrictions could be enforced for traffic using the bridge as repairs were carried out, he said.

The work was likely to be months away and had not been budgeted for yet.

Contractors had only just completed a $700,000 earthquake retrofit two weeks ago, which
involved adding extra braces, restraints and 25m-long anchors to the bridge.

The work was part of Transit's ongoing national seismic retrofitting programme, which aimed to bring bridges around the country up to current seismic standards.

The cracking which allowed wastewater to leak from a pipe running through the centre of the Shotover bridge was a maintenance issue caused by a ''premature failure'' of the 15-year-old pipe, QLDC acting water manager John Porter said.

The leakage of about two litres of wastewater a minute on to the Shotover riverbed was spotted by a member of the public walking a dog on Saturday afternoon.

Members of the Arrowtown Volunteer Fire Brigade, wearing breathing apparatus, crawled into the bridge's service duct to photograph the damage, in an operation taking nearly three hours, on Sunday.

Contractors rerouted the wastewater flow to a newer pipe which had been installed about three years ago to provide extra capacity but had not been used, Mr Porter said.

The newer pipe would be used until a planned upgrade of pipes running through the bridge was carried out later this year.