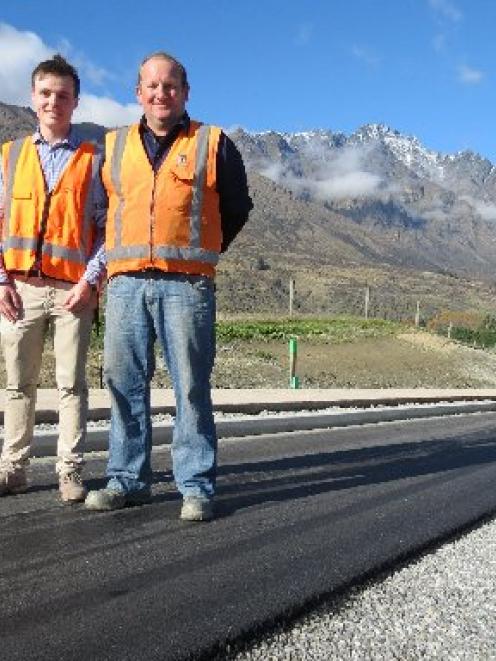 Gerard Bligh, of Remarkables Park Ltd (left), stands with Fulton Hogan construction supervisor Andrew Dennison, of Cromwell, on an asphalted portion of the first stage of the Eastern Access Rd. Photo by Tracey Roxburgh.
It has taken three years of legal battles but Queenstown will get a Pak'n Save and Mitre 10 Mega store at Frankton Flats, after no appeals were lodged against approved resource consents.

Foodstuffs South Island Ltd property and retail development general manager Roger Davidson said the company was ''thrilled'' to confirm the development of Pak'n Save Wakatipu in Shotover Park, which was ''incredibly exciting''.

''This is a great reward for the large number of people involved and we appreciate the ongoing commitment our partners in the Shotover Park Development, the Porter Group and [Mitre 10 Mega], have shown during the resource consent building.

''We can't wait to forge ahead with building the new store,'' he said.

''This is the green light we needed to start developing the architectural design for the store.''

No timeline for construction had yet been developed as there were still ''key aspects'' still to be worked through between Foodstuffs and the Queenstown Lakes District Council.

Those included infrastructure required to service the building, including roading requirements.

Yesterday was the scheduled completion date for sealing of the first stage of the Eastern Access Rd, which will eventually link around the Queenstown Airport runway to a relocated Glenda Dr intersection with State Highway 6.

Work began on the $5 million, four-lane, 650m extension past the Remarkables Park Shopping Centre in January, along with two 200m-long intersecting roads. Work was slightly delayed by recent rain.

Fulton Hogan construction supervisor Andrew Dennison, of Cromwell, said contractors began asphalting yesterday. Chip sealing, paving of footpaths and street lighting were also under way and the first stage was scheduled for completion within the next two to three weeks.

In total the Eastern Access Rd will cover 2.1km from the existing entrance to Remarkables Park to Glenda Dr and another 1.2km from Glenda Dr to a new roundabout on State Highway 6.

Mr Porter said following discussions with the NZTA he was ''confident'' the northern end of the road would be finished by next winter.

Pak'n Save was first granted consent by the Environment Court in July 2012 after the council declined consent in 2011.

The Environment Court decision was appealed, consent was overturned and leave was granted to apply to the Court of Appeal.

In the interim, the company sought consent for a slightly amended proposal through the council earlier this year. That consent was granted and no appeals were lodged.

The Queenstown Lakes District Council had allocated $8.8 million for the project in its Draft Annual Plan, but it also required funding support from the New Zealand Transport Agency.

A spokesman for the developer, H&J Smith managing director Jason Smith, is overseas and was unavailable for comment.