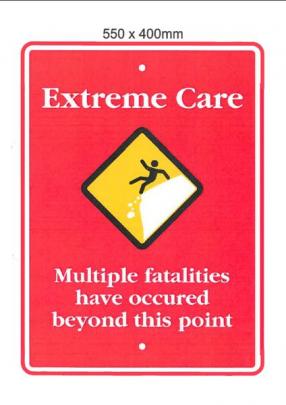 The sign which will warn trampers of the dangers posed by the Cascade Saddle track. Image by DOC.

A stark reminder of the deaths which have occurred on the Cascade Saddle in Mt Aspiring National Park will be provided to climbers through new warning signs this summer.

The signs will be installed by the Department of Conservation within the next month and are the outcome of a report into ways of preventing fatalities on the saddle.

Leading mountain safety expert Don Bogie prepared the report, which listed upgraded signs as the most practical and effective safety measure, a view endorsed by police, search and rescue volunteers and climbing experts.

Since 2004, at least five people have died on the Cascade Saddle, the highest point (1524m) on an alpine route between Wanaka and Glenorchy.

The safety of the route came under the spotlight in Queenstown in August 2013, when Otago-Southland coroner David Crerar said there had been ''far too many deaths'' in the notoriously treacherous area.

His concerns echoed those of former coroner Alan Macalister, who adjourned an inquest into a tramper's death in 2005 so Doc and police could investigate ways to make the area safer.

Doc Wanaka conservation services manager Chris Sydney said signs installed at the Aspiring and Dart huts last summer referred specifically to the fatalities which had occurred on the route.

However, signs at either approach to the saddle had featured only slipping symbols and would be replaced, to match those at the huts.

Other options for improving safety on the saddle had been ruled out, including realigning the top of the route, to direct climbers away from the steep gully where previous deaths had occurred.

The alternative track was steeper, and while the consequences would be less serious than a fall down the gully, the frequency of falls would be greater, Mr Sydney said.

A suggestion to reinstate the old ''Ernie Smith route'', about 1.5km away, was scrapped because climbers would have to spend more time exposed to the elements. Installing structures such as handrails or barriers could create snow-banking.

Constructing an entirely new route would be a ''major capital works undertaking'' that would be years in the planning.

Doc was rewording its brochure and website information to emphasise the dangers associated with the Cascade Saddle.

It was also considering providing extra information at huts during summer.