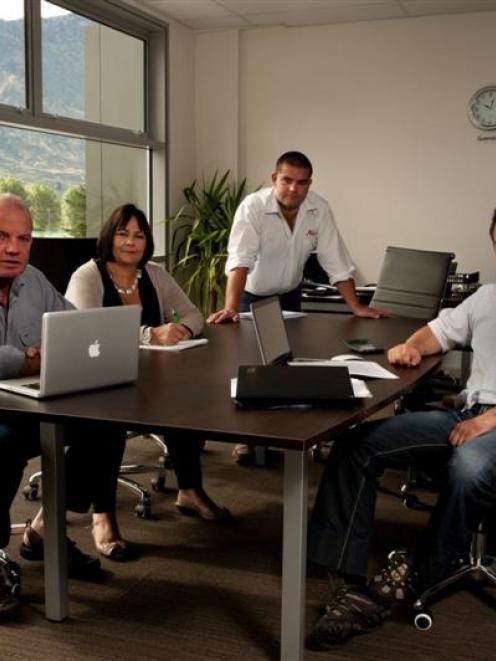 The Kershaw Aviation Group had already established itself offshore with a major contract in Indonesia, and it expects to grow the business exclusively offshore from its new office at Terrace Junction.

The family, which has aviation in its blood, is delighted technology allows its business to be located in Queenstown.

Operations manager Josh Kershaw said the family had all grown up in Queenstown and loved the area.

"It's really a dream to have the family working together - all the skills we need as an aviation group are right here within our family.

"We can offer a full service aviation company all under one roof."

Dave Kershaw, who has flown 17,000 hours, began his career flying in Fiordland in the heady days of deer recovery, while Josh Kershaw flies fixed-wing planes.

Mark had been working within his field on and offshore for the past 12 years, touring in PNG for Airwork NZ Ltd where he learned to understand the difficulties of working in remote areas.

Josh is an operations whizz whose experience includes managing aircraft crews in Indonesia for seven months after the Banda Aceh Boxing Day Tsunami, and he holds a New Zealand service medal for that work.

Ricky Kershaw has a background in banking and provides support for offshore work, including data entry and civil aviation compliance.

The New Zealanders were employed for their "No 8 wire" mentality and ability to provide air support for the world's largest gold mine, third largest copper mine and most importantly, the world's highest open pit mine.

"The altitude is the problem," Josh said.

"It's a very high place to service by helicopter.

"We collect samples for scientists studying the deterioration. Current measurements indicate these glaciers could be extinct in as little as a decade."

Their five New Zealand pilots working on the drilling operation were flying at altitudes believed to be the highest in the South Pacific.

"This operation has given us huge experience and we are now looking to expand our operation into other areas," Josh said.

"We're an export business running from Queenstown that has the skills in-house to think well outside the square.

"We're set up to provide this sort of aviation problem-solving for any job, anywhere."