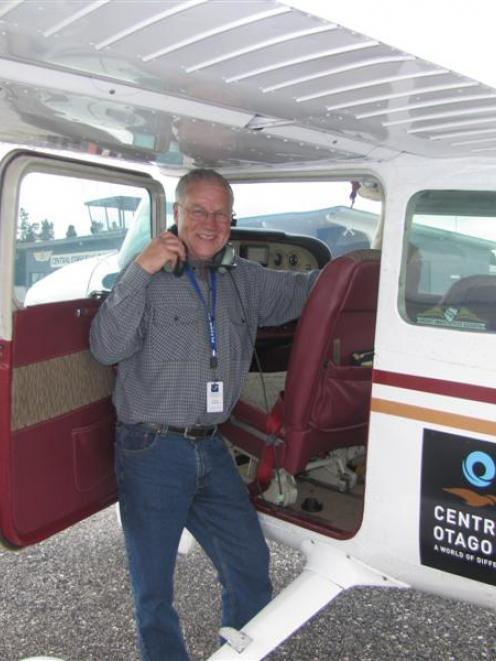 Steve Whitren, of Alexandra, after the "brain teasing" <i>New Zealand Herald</i> Navigation competition. Photo by Sarah Marquet.
Liferaft dropping, bombing, precision landing and navigation were all part of the Lakes Area Rally, a competition hosted by the Central Otago flying club in Alexandra on Saturday.

Club president Russell Anderson, of Alexandra, said there were 16 competitors from Timaru, Otago and Southland and despite the Oamaru club not being able to make it due to weather conditions, the competition had gone well.

Local entrant Steve Whitren said the New Zealand Herald navigation competition was "brain teasing". He was up against four-time national navigation winner Tony Page, of Timaru, who in the end won the trophy. Both competitors were given 20 minutes to plan a flight path from the airstrip to the Clyde dam, the old Poolburn Hotel, the Whitehorse Hotel in Becks, the Alexandra Bridge then back to the airstrip.

Chief judge Roger Bennet, of Alexandra, joined them in the cockpit and marked them on their altitude, compass heading and nominated airspeed at various points.

Competitors in other events were judged from the ground, from the cockpit, or both, depending on the event.

Each of the participating clubs supplied a judge for the competition.

In the Ivon Warmington trophy for liferaft dropping, the competitor tried to drop a liferaft-type package on a mark 15m downwind of three roadcones meant to symbolise a person floating in the water. The pilot and despatcher team of James O'Connell and Mandy de Beer, both of the Southland club, were the only participants and therefore won.

The Rotorua Trophy for bombing (bottles filled with sand) went to Gary Wilson, of the Central Otago club; the Sir Francis Boys Cup for precision flying and landing was won by Tony Page, of the South Canterbury club; the Newman Cup, the women's division of the precision flying and landing, went to Mandy de Beer; the Airwork Cup for low flying went to Claire Davies, of the Southland club; the G M Spence Trophy for forced landings went to Wayne Matheson of the Central Otago club; the Wigram Challenge Cup went to the Southland club with its competitors getting first in the four categories that make up the challenge (non-instrument circuits, Claire Davies; instrument flying, Angus McIrvine; senior landing, James O'Connell; and junior landing, Tom Richardson).

Though this is an annual event, the Central Otago club has not hosted the Lakes Area Rally since 2004.