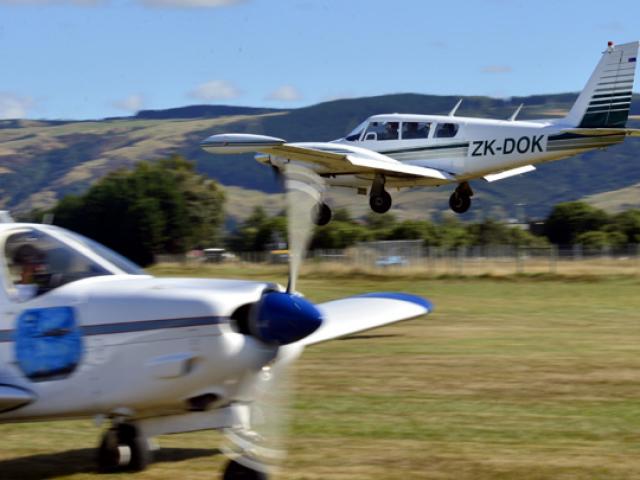 A 1969 Piper Comanche twin-engine light aeroplane lands and runs past the end of the runway at Taieri Aerodrome yesterday.

A Queenstown-based aviation company has taken delivery of a Eurocopter AS 350 B3e, the first of its kind to arrive in New Zealand.

Launching a career in aviation is no longer just "pie in the sky" stuff for Otago secondary school pupils.

Liferaft dropping, bombing, precision landing and navigation were all part of the Lakes Area Rally, a competition hosted by the Central Otago flying club in Alexandra on Saturday.

New adventure aviation safety standards - the only such formal regulations in the world - take effect today, with international regulators watching keenly but some operators not impressed.
Two people on board a light aircraft which crashed near Queenstown during the weekend were "lucky to be alive", a New Zealand Rescue Co-ordination Centre spokesman says.

A total of 162 submissions have been received by Lakes Environmental regarding the float-plane operation proposed for Lake Wakatipu - 135 in opposition.
Omarama is to celebrate the start of the new gliding season with an open day at its airfield on October 1.
Air New Zealand resumed flights to Queenstown yesterday, with one from Auckland arriving at midday.
The International Air Transport Association yesterday slashed its 2011 airline industry profit to $US4 billion ($NZ4.92 billion), a 54% fall compared with the $US8.6 billion forecast in March.
New Zealand's trade balance recorded a seasonally adjusted deficit of $428 million in the three months ended March, largely due to one-off imports of large aircraft and higher fuel prices.
The Civil Aviation Authority has charged an individual on a Pacific Blue passenger jet for allegedly compromising safety by taking off from Queenstown Airport last year after the deadline for departures.

There is never a dull moment at Queenstown Airport, as chief executive Steve Sanderson explains in this week's Wakatipu Echo - with an incredible amount achieved in the past 12 months and even more to do in the next.

An international aviation business has been launched from Queenstown by a family which has always considered the resort home.
Flights in New Zealand are not taking off in the wake of today's 6.3 magnitude earthquake in Christchurch.

Zoe and Maia Halls, of Dunedin, were ready and dressed three hours early yesterday for their meeting with a special visitor.
An Air New Zealand flight to Wellington made an emergency landing at Dunedin airport at 5.42pm, after a bird was sucked into its left engine.
The Air New Zealand shareholding and alliance with Virgin Blue has received the tick of approval from brokers and Moody's Investors Service, with brokers picking more good news to follow.

After 30 years of service, Queenstown coroner Alan Macalister was unable to close his last case yesterday - a helicopter crash which claimed two lives - because of a delayed Civil Aviation Authority report nearly five years in the making.

Underpinned by tourism, listed Auckland International Airport's gateway status to New Zealand is forecast to deliver up to 19% of the country's economic growth within 20 years.