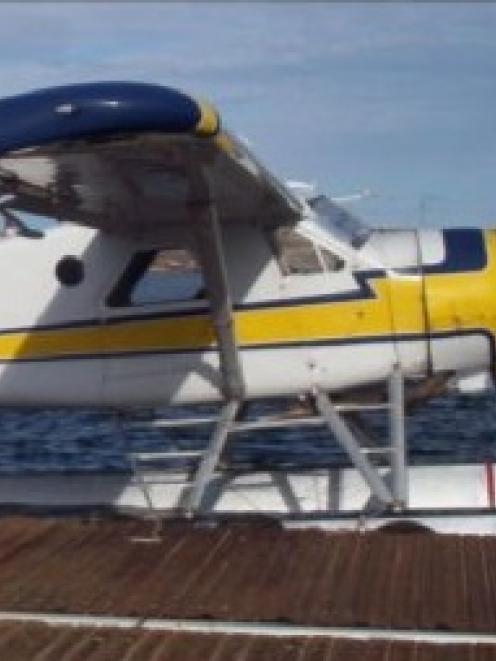 A De Havilland Beaver float plane. Photo supplied.
A total of 162 submissions have been received by Lakes Environmental regarding the float-plane operation proposed for Lake Wakatipu - 135 in opposition.

Submissions came from as far afield as the United Kingdom opposing the proposed operation, which would be based at a floating pontoon on the Queenstown Gardens side of Queenstown Bay.

The proposal was first heard two years ago and now commercial pilot Brent Collins, who lives in South Africa, is seeking land-use consent to establish the float-plane tourism venture on Lake Wakatipu.

Take-off and landing areas would be located in the open waters of Lake Wakatipu, with a reserve site at Frankton Arm.

A water-taxi system to shuttle passengers to and from the plane is also being sought.

Operations would also include charter trips to Lakes Wanaka and Hawea.

The most common concern from submitters was noise pollution over the lake.

Real Journeys' operations manager, Tracey MacLaren, was concerned over the compromise to TSS Earnslaw and the safety risk on the water.

"We understand these float planes are not as navigable as boats on water and so pose a real safety risk."

"We believe that the noise of departing float-plane aircraft within Queenstown basin will spoil the enjoyment of many visitors for the pleasure of a few."

General manager of community services Paul Wilson made a submission on behalf of the Queenstown Lakes District Council stating that the council would also speak on its submission.

The council opposed the float-plane operation because it would interfere with the public's enjoyment of the gardens.

The council's main concern was noise as it would "directly affect visitors to the gardens and compromise the tranquility of the gardens".

The plane's take-offs and landings also raised safety concerns for the council.

Henry Crawford, of Arrowtown, had experience with planes similar to the ones that would be used while running his Fiji resort for 20 years.

He submitted the Cessna and Beaver plane operations would be too loud over the lake and that, in his experience, the planes "made an incredible amount of noise".

"Given the geography of the lake's surrounds, these aircraft are going to create an unacceptable din for many, and will certainly affect the quality of life for those who live in the vicinity."

Mr Crawford also expressed concern about the safety of passengers.

He said they could be in "inherent danger in the operation of rough water" and there would be a risk of the plane flipping if staff were not suitably equipped.

Supporters of the float-plane operation were few, with nine coming from the lower North Island town of Shannon.

Three of those were from the Woodmass family and three from the Cransons.

Mr Collins also picked up some home support from Rural Helicopters of Blenheim.