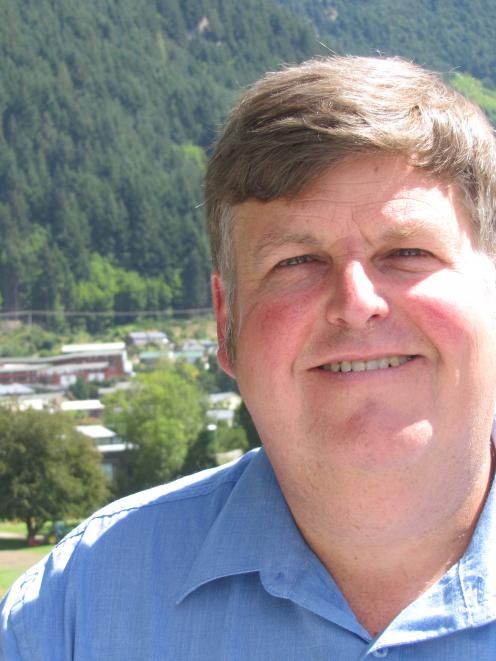 "The town has certainly changed a lot." Outgoing QLDC chief executive Duncan Field reflects on changing times in Queenstown during his 12 years at the top. Photo by Henrietta.
After 12 years as chief executive for the Queenstown Lakes District Council, Duncan Field is moving on. During his last week in the job, he talked to reporter Henrietta Kjaer about the changing face of Queenstown, the challenges and highlights of the job - and about moving on.

"I am not too fazed by my situation. When one door closes, another will open," Queenstown Lakes District Council chief executive Duncan Field says.

Mr Field was remarkably calm and positive, when he sat down to talk to the Otago Daily Times about the job he has held for more than a decade.

After all, it was just four days before his last day in the job he had applied to keep for another term.

The council was obliged to readvertise the chief executive position every four years.

About 40 people had applied for the job, which carries a salary package totalling close to $280,000.

The council announced the appointment of UK-born Debra Lawson for the job on December 18.

At the time, Mr Field had expressed disappointment, but this week he said he respected the council's decision to employ the candidate it felt was most suitable for the job.

"When you take on a job for a contracted period, you know this can be the outcome.

If you are not prepared to handle it, this would not be the job for you.

I had already been reappointed twice, so I know the drill.

I thought long and hard about applying for another term.

"It is my nature to look ahead to the future, rather than dwelling on the past," he said.

However, he agreed to take stock of the local government administration he had run, before he handed the reins to his successor.

Highlights
He said the town had no supermarkets and no international flights when he started in the job in February 1998.

Management of the town's growth became the major issue at the 2001 local government election, and he was proud of the way the council had been driving the urban planning.

"The council has worked through 34 plan changes since 2001, and has certainly changed a lot.

It is a testament to the success of a lot of people with visions and the energy to carry them out.

"On my overseas travels, I have seen a lot of similar resort towns, especially in North America. There are a lot of `Disneyland towns' out there, but Queenstown is not like that. Growth has been planned and regulated here for some time, and it shows. Our landscape has remained our driving factor."

Among the highlights of the council's achievements during his time, he pointed to expansion of the road network, establishment of wastewater treatment, improvement of the health system and better facilities for children.

"My main legacy will probably be increasing the capability of the organisation. Staff has been empowered to deliver good service through the use of cutting-edge technology, and we have a great team of planners with the ability to explain the issues they work on. That gives our councillors a great support," he said.

Challenges
He admits the council still has a solid challenge in making the public understand the complexities of the cases it works on.

Another challenge is making the Government understand Queenstown.

"It frustrate me that the Government thinks everyone in the Lakes District is wealthy, and doesn't need funding.

Kingston is a great example of a community the Government ought to support in getting sewage facilities.

The same goes for our schools, which struggle to get adequate funding."

Challenged with the fact that QLDC's debt has grown steadily over the past decade, Mr Field also points to the complexity of the council's finances.

"Yes, the debt has grown from $20 million to over $100 million in a few years. But bear in mind the council had built about $400 million worth of assets for those loans.

"The council is under pressure to keep raising the service levels, even through hard economic times. We work hard on keeping expenses down. We could have cut costs even more, by ignoring much of the long-term planning and maintenance we have started, but it would not be responsible.

"My greatest frustration in this job had been to hear people say that QLDC does not listen to them.

We really do listen, and spend a lot of time and resources on consulting the public. But people need to understand there will always be different opinions, and sometimes the council has to cut through and make a decision."

Being in a high-profile job in a small community is another thing he found challenging.

He said he preferred not to go out for business lunches, as he did not wish to be seen as giving anyone special treatment.

He shrugged off the public statement from the Queenstown Chamber of Commerce during the recruitment process, encouraging the council to look for another candidate.

"I have always preferred to keep my personal opinion to myself. I'm not employed to be the politician, but to be the impartial adviser."

Looking ahead
On his way out the door, Mr Field said striking a balance between the use of contractors and permanent staff is one of the challenges the new CEO will be dealing with.

As one of the main facility challenges, he mentioned the modernisation and development of Queenstown's sewage and water treatment.

Yet, he was reluctant to give too much advice to his successor.

"This is the kind of job you have to make your own. I don't believe `advice from the grave' works."

On the personal level, he said he is in no hurry to make a decision on his future career.

"I will take a good long holiday of at least four to six weeks. Go on a road trip around the country with my family, hopefully doing a lot of fishing, camping and drinking good wine.

"I am going to take my time to think about my options and discuss it with family. I have confidence in my skills, and I have already had a number of phone calls from both private and public-sector employers, but I cannot talk about them now, as I am still considering all options."

He said he was prepared to move to another part of New Zealand for work if required.

The youngest of his three children leaves home next month to study at Canterbury University.

His wife, Claire, works part-time in Cromwell, and they were both happy living in Arrowtown.

"We don't expect to sell our house, so I will remain a ratepayer here.

"It will be interesting to be `on the other side' and watch the council work.

"I could even put a bumper sticker on my car to express an opinion," he said, laughing.

"Sometimes you have to let go and move on - and I'm looking forward to new opportunities."