Firefighters to help out in Gippsland 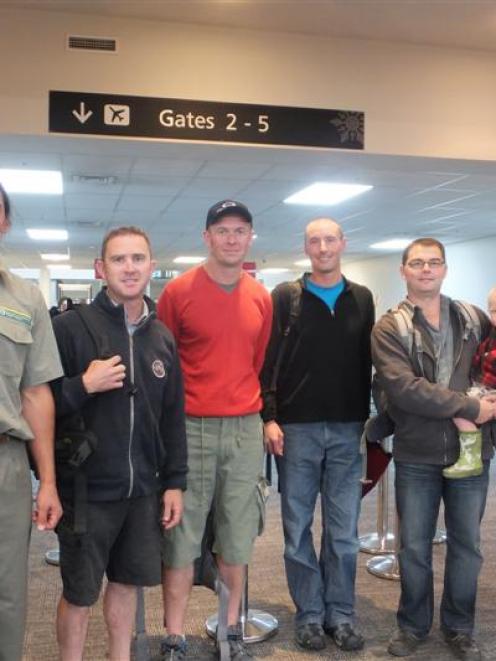 Department of Conservation firefighters leaving Queenstown yesterday for Melbourne, to help fight the Victorian bushfires are (from left) Patrick Eschenmoser, of Wanaka, Jamie Cowan, of Queenstown, Mark Mawhinney, of Queenstown, Gerard Hill, of Te Anau, and Gavin Udy, of Clyde, pictured with son Lucas (2) and partner Rebecca Thomas. Photo by Olivia Caldwell.
On the same day two Australian firefighters were killed while fighting the Victorian bushfires, five Otago firefighters took on the job of helping across the Tasman and will begin duty this morning.

New Zealand's National Rural Fire Authority yesterday sent its second-largest deployment of 44 firefighters to Victoria to help boost the Australian Fire Authority and beat the bushfires in the Gippsland area started by lightning on January 21.

The New Zealand contingent of 44 comes second only to 2009's deployment of 109 firefighters to the same state. Five Department of Conservation firemen from the Otago region flew out of Queenstown yesterday morning to arrive in Melbourne last night via Wellington.

Mr Cowan said although that experience would help him know what to expect, the 12- to 16-hour days and seven-day rosters would be fatiguing.

''It has been a long fire season for them. It is part of what we do and it is what we train for.''

''I am much more comfortable roughly knowing what I'm going to face.''

With less than 24 hours' notice, the men each said their rushed goodbyes to their partners and children before boarding in Queenstown to fly to Wellington where they were to board a Royal New Zealand Air Force plane with 39 other firefighters and ''a lot of gear''.

''They [family] are a little bit used to me going out on jobs for days at a time; they're very supportive,'' Mr Cowan said.

Heading to Australia for his first fire visit, Mr Mawhinney was a little more hesitant.

''There's no question about it - there is a bit of apprehension, especially after being told this morning two of the Australians were killed there.''

National Rural fire officer Murray Dudfield said the 44 firefighters would be working among ''tall timber alpine'', but could not confirm exactly where they would be deployed once they landed in Melbourne.

''They will be out in the fire line, building fire breaks, pulling down trees and pouring on the water.''

Of the 44, five are from Otago, five from Southland, two from Hokitika, five from Marlborough and one from Canterbury.

Mr Dudfield said once the men were in Australia, they would be dedicated to the Australian agency and he would get feedback every day to inform their families.

The National Rural Fire Authority received an official request from its Australian counterpart on Monday and notified those on the list they would be going on Wednesday.

On that same day, two Australian firefighters, a woman in her late teens and a man in his 30s, were killed when a tree fell on their vehicle in a remote valley near the town of Harrietville.

Fire crews have been battling the Harrietville fire since January 21 and it has so far burned through 27,000ha. Four firefighters have died this summer while working on Australian bushfires. The 44 firefighters will be based within a mobile camp set up by the Australian national fire authority and will return in April.