Getting it in the gallery was challenging 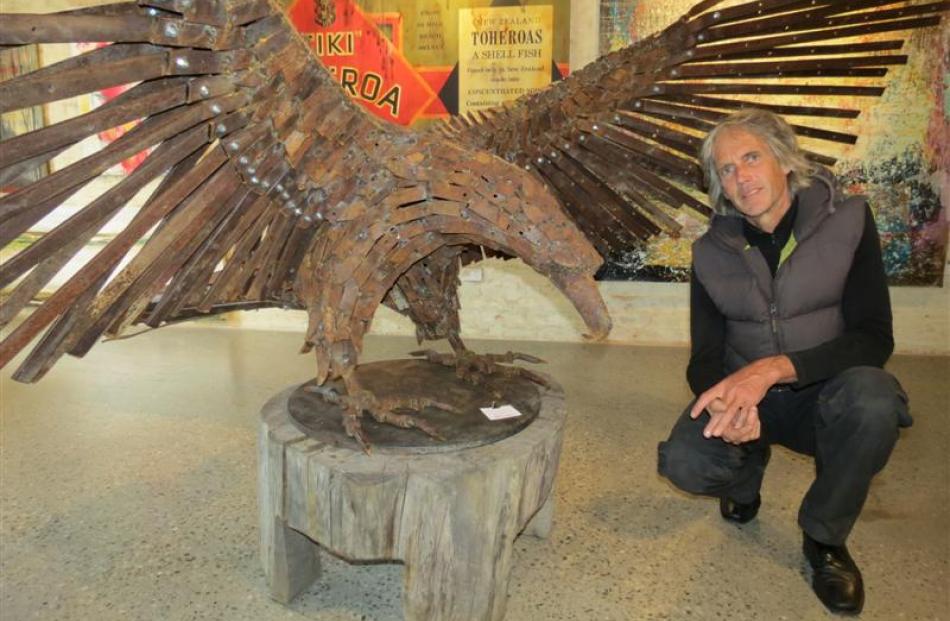 Multifaceted designer and sculptor Dan Kelly, of Glenorchy, presents The Haast Eagle (2014), his third and most lifelike and life-sized metal sculpture of the extinct creature from New Zealand's past. Photo by James Beech.

The eagle has landed in Queenstown - a huge $55,000 sculpture created by a Glenorchy artist from century-old fencing standards recovered from Otago high country stations.

Designer and sculptor Dan Kelly melded his 30 years of experience of designing three-dimensional signs with his fascination with the great birds of New Zealand's pre-human history and his self-taught artistry to produce The Haast Eagle.

The striking metal sculpture of the extinct bird of prey weighs 350kg, is 1.2m high and has a wingspan of 3.6m.

The 130 glider feathers are removable for ease of transport. Reassembly and installation took all day.

''Getting it in the gallery was challenging,'' he said.

Kelly said it was the third bird in his series and was the most lifelike yet.

The first eagle he created from discarded metal was slightly larger was bought by a racehorse breeder in Canterbury.

The second eagle was bought by a winery and shipped back to France.

Work on the latest piece began in February in Kelly's home studio at the top of the lake.

The artist worked from his knowledge of birds, their feathers and muscles, to arc weld and gas-axe the metal into the shape he wanted.

He worked from the 10cm-long talons up and said distributing the weight, so it stood on its own two legs, was ''incredibly difficult''.

Kelly said he hoped viewers of The Haast Eagle in Artbay Gallery took away ''understanding of how much New Zealand's changed in such a short space of time.

''We only had birds here and Haast's eagle was the No 1 bird in the land. All other birds feared them, so it's amazing to show their scale and grandeur to the public.''