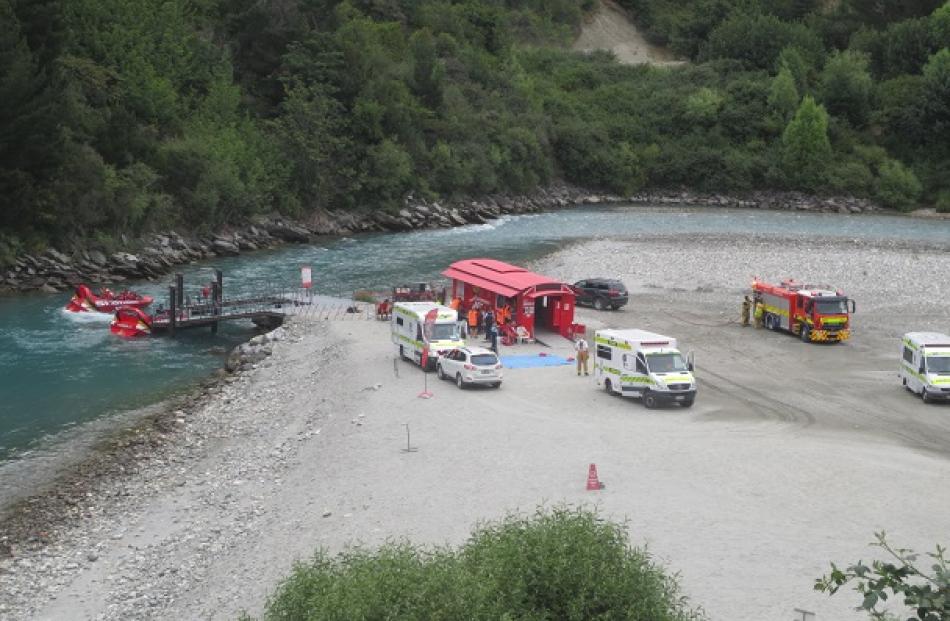 Paramedics at the Shotover Jet base after the accident yesterday. Photo Paul Taylor

A 12-year-old girl remains in hospital following a jetboat crash near Queenstown yesterday.

The girl, believed to be an Australian tourist, was injured along with five other people when the Shotover Jet hit a rock near Arthurs Pt on the Shotover River about 4.30pm.

Among the injured was a honeymooning couple.

Five other people suffered minor injuries and were taken by ambulance to the same hospital, including the just-married Kiwi couple. The remaining eight passengers and the jetboat's male driver were not hurt.

The Fire Service and ambulance officers were taken to the injured by jetboat, Acting Senior Sergeant Craig Dinnissen, of Dunedin, said. Worksafe and Maritime New Zealand had been told and would investigate.

Four of the five people have been discharged this morning, but the 12-year-old remained under hospital care for "precautionary reasons", Shotover Jet manager Clark Scott said.

"We are confident that she's ok, but we're all acting in a very, very cautious manner at this stage," he said.

"We are doing all that we can to continue to offer our support to those that were on the boat and their families and/or friends that were travelling, and of course, our driver that was involved in the incident."

The boat, one of seven the company uses, hit a rock, he said, but it was "too early" to say at this stage what exactly happened.

The company was working with investigators, and had brought in an independent investigator of its own, to establish how the crash occurred, he said.

Shotover Jet, which is owned by Ngai Tahu Tourism, has carried more than three million passengers since being launched in 1965. In April last year the company gained international attention after taking the Duke and Duchess of Cambridge on a trip.

- Cherie Howie of the Herald on Sunday and NZME. News Service