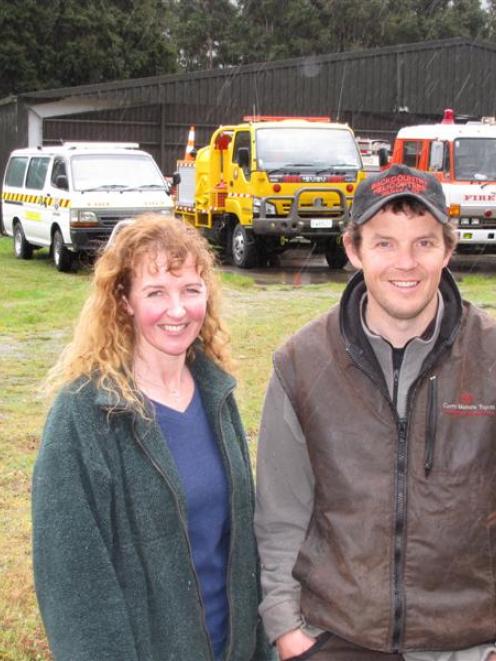 Heather Pennycook, with current chief Chris Wilson, will take over as fire chief for the Makarora Rural Fire Force this month when Mr Wilson moves to Oamaru after two decades' volunteering for the force. Photo by Lucy Ibbotson.
Makarora Rural Fire Force's departing fire chief Chris Wilson is not one to blow his own trumpet. But his soon-to-be successor Heather Pennycook - who has served alongside him at many of Makarora's emergency call-outs in recent years - credits him with transforming the voluntary group from its humble, poorly-equipped beginnings, into one of the best-resourced rural fire forces in the South Island. The pair spoke to Lucy Ibbotson about the changing of the guard and the challenges of maintaining a voluntary organisation in a tiny, remote settlement.

The emergency response team in Makarora had little more than a stretcher, a first aid kit, some accident signs and a few tools when Chris Wilson (41) joined the ranks in the early 1990s, after moving to the area from Dunedin to work for the Department of Conservation.

Back then, when the siren sounded, the valley's volunteers would do a quick ring around, then ''just chuck it [equipment] on the back of a ute or something and away we'd go'', Mr Wilson explains.

A serious fatal collision between a campervan and a ute marked the turning point for the group to start improving its resources. An emergency trailer was bought, then with support from Queenstown Lakes District Council, the group became an officially recognised rural fire force (MRFF) and acquired a jeep for fire-fighting purposes.

''Everything snowballed from there, really.''

When Mr Wilson became fire chief nine years ago, his team raised funds for a support van. A new fire engine bought by the council arrived shortly after, before a second engine - surplus to requirements at Colac Bay, in Southland - joined the fleet.

The absence of cellphone coverage in the area was overcome by a New Zealand Fire Service pager system and, today, a new satellite phone gives extra capability.

The force is now resourced to a point where it can ''make some impact'' in emergency situations, a far cry from the days when volunteers attending fires relied solely on a Wajax pump on a trailer.

Heather Pennycook says National Rural Fire Authority auditors routinely hold MRFF up as a glowing example for others to aspire to.

''That's amazing for a small place in the middle of nowhere ... and that's because Chris has poured his heart into it.''

Mr Wilson's role as Makarora's Doc field centre supervisor was scrapped in the department's recent restructuring, which has played a big part in his decision to move to Oamaru this month with his wife, Emily Anderson, and their two children, to start a new job in construction.

''I'm going to miss living here, there's no doubt about it, because I've spent half my life here and half my life doing this sort of stuff, but I think change is good for me.''

He has been ''subconsciously'' training up fellow volunteer Ms Pennycook (46) to replace him as fire chief, knowing the day would eventually come when it was time to leave the valley.

MRFF will remain ''in good hands'', he says, acknowledging the experience and skills Ms Pennycook will bring to the fire chief's role. 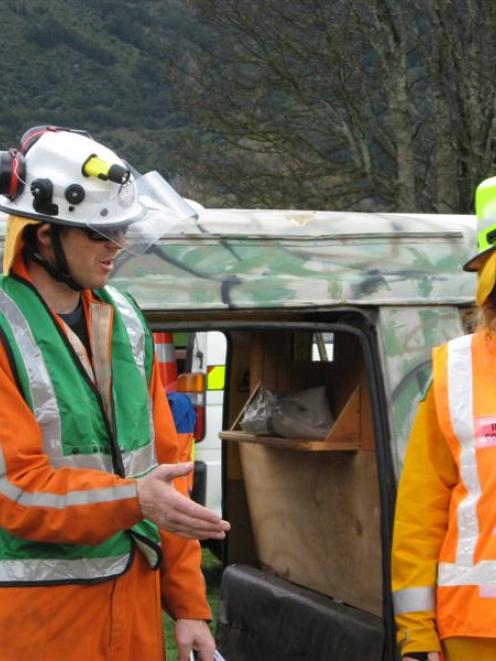 Mr Wilson, and his successor, Ms Pennycook, hone their skills during a mock vehicle accident training exercise last month. Photos supplied.
The pair, also both members of LandSAR Wanaka, agree attracting volunteers is the primary challenge in Makarora, where there is a permanent population of just 70-90 people and a high turnover of short-term residents.

Ms Pennycook joined MRFF in 2009 when she returned to Makarora - where she grew up. She remembers Chris as a ''young fella'' when he first arrived in what was a very different community from today.

''Back then, almost all of the valley residents were long term or permanents who owned land and businesses here,'' she says.

''Now almost all the farm land is owned by overseas people and a lot of our residents work on the farms or at the tourist centre, so are temporary or seasonal, which makes it a lot harder to find volunteers who are willing to commit their time and energy to training and callouts.''

Volunteer numbers average between 15 and 18, but the figure fluctuates considerably, and continual training is required to get new arrivals up to speed and to improve the skills of long-serving members.

All the volunteers have a minimum of basic fire safety and first aid, although some have far more experience, including Mr Wilson, whose fire and emergency training from Doc has also served him well in his fire chief role.

The Makarora force is usually the first response for road accidents, medical emergencies, fires, and search and rescue operations within an area spanning from The Neck to just south of Haast. Other emergency services are up to an hour and a-half away.

''We're finding now we're using the rescue helicopter a lot just because it's the easiest way to get people evacuated to hospital in a short time ... rather than waiting for hours and hours for an ambulance to turn up,'' Mr Wilson said.

The volunteers attend an average of 15-20 callouts a year, covering a broad spectrum of emergencies.

''A lot of the stuff that we go to here is just totally different from other places because it's just so remote.''

Among the most memorable callouts during Mr Wilson's tenure was a bus crash in the Haast Pass involving multiple injuries, and the blaze which destroyed the Makarora Doc office, right next door to the fire shed.

''I got a page that said 'Makarora fire station on fire'.''

Also unforgettable, was the time a horse got its legs stuck in a cattle stop on the Haast Pass in the middle of the night, during a thunderstorm no less, requiring the use of a gas cutter to free the animal.

''That was probably one of the more bizarre ones.''

The camaraderie between volunteers who represent a cross-section of the community has been the biggest motivation behind Mr Wilson's long service.

''And if I was out here in Makarora and something went wrong with me, you'd hope that someone would come to your aid ... that's probably the other reason I do it.''

Ms Pennycook - who lives with her two children on a Makarora farm and works part-time in Wanaka - says Mr Wilson's departure will leave ''a huge hole'' in the community and MRFF.

''But we have to learn to stand on our own two feet.''

Her training during the past four years would stand her in good stead, she said.

''I'm not a girly girl and I have a chain saw and I do a bit of mechanical stuff.

''And I am confident that the locals here have any skills that I lack and that together we can work as a team to take MRFF into the future, in a way that Chris would be proud of.''