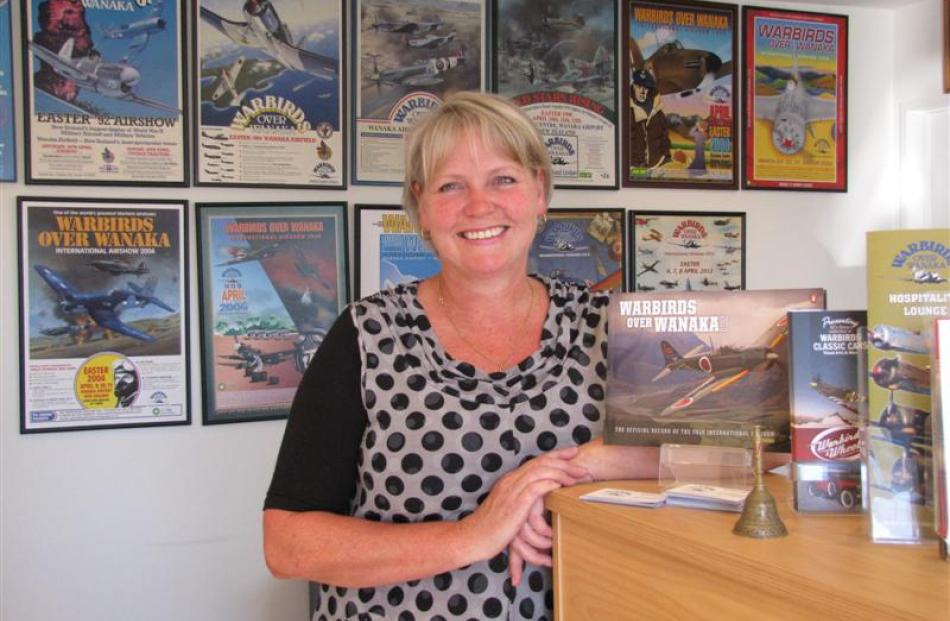 Gill Loughnan is helping the Warbirds Over Wanaka administration team gear up for the international airshow from April 6-8. Photo by Marjorie Cook.

The Warbirds Volunteer Army of at least 400 people is about to swing into action, undertaking the many tasks that go towards making the huge event run smoothly, writes Marjorie Cook.

Behind every Warbirds Over Wanaka airshow stands a large army of volunteers.

This Easter, at least 400 people will donating their time to work at the three-day show on a diverse range of tasks such as selling tickets, programmes and merchandise, hosting schools and war service veterans and cleaning up afterwards.

Among them will be Wanaka woman Gill Loughnan, who has been working between one and three days a week with the administration and event management team since late January and will help the team wind-down afterwards.

"I love it. My husband has planes [a 90% Tiger Moth and a Cessna] so we were interested. We have come as attendees before. This is really nice and everyone is really lovely. And you feel like you are doing something for the community," Mrs Loughnan said.

She and her husband, Jim Loughnan, are Christchurch earthquake "refugees". They settled in Wanaka permanently last August after deciding they wanted some peace.

Their house has been red-stickered but the couple returns from time to time to visit their 21-year-old son and Mr Loughnan's manufacturing business.

Their 18-year-old daughter lives with them in Wanaka.

Mrs Loughnan is a nurse and recently worked for the Urology Association.

Taking up a volunteer role with Warbirds had been a cathartic experience, helping her move on with her life, she said.

"For the first week, I would answer the phone saying "Urology" and then "No, where am I!", she laughed.

She enjoys being part of Wanaka's growing volunteering movement.

"I think the downturn in the economy means people can't afford to pay for the help they need. If the community doesn't get in and help, it means we won't be able to be run the events we need ... Now I have got time on my hands, rather than sit at home feeling sorry for myself, I will get out and do something. That has really helped," she said.

Mrs Loughnan has put together hundreds of information packs for media, pilots, exhibitors and VIP guests.

She has attended to mail-outs (cajoling people into giving out physical addresses for courier deliveries has proved one of the trickier jobs), is helping prepare databases and documents, answering phones and doing other general duties.

This week, she will settle exhibitors' stands and organise power and requirements such as trestle tables and chairs.

Mr Loughnan will also be volunteering, helping the people in the control tower during the three days of aerial displays.

"It is wonderful. I love it ... I absolutely recommend it. You get home tired but I am really excited. I am really looking forward to the whole thing coming together," Mrs Loughnan said.

Volunteering
What volunteers do at Warbirds Over Wanaka:

• Organisations: Wanaka Swimming Club, Nordic Ski Club, Wanaka Bowling Club, Air Force Cadets (Alexandra), Cromwell Rotary Club, Holy Family School
• People: at least 400 people in total; 215 are required every day for three days
• Hours: 7.30am - 5pm, in two shifts of about six hours each, for three days.
• Amounts: Donations to each organisation vary from $1000 to $10,000 depending on the task the organisation performs and how long they spend on it, event manager Mandy Deans says. The Warbirds Over Wanaka Charitable Trust does not put conditions on what organisations do with the money. It is usually applied to equipment purchases, capital projects or operating expenses.
• The clean-up: Wanaka Wastebusters will be on site for three days, managing waste and recycling. The public can help clean up by using rubbish bins. The main clean-up begins on Monday morning (April 9) and involves a grid walk over the airport, collecting rubbish such as ticket stubs, cable ties and bottle tops.
• Lost and found: Lost property will be collected at the Warbirds office. The quirkiest piece of lost property left at the airshow was a dog.
• Dogs: not permitted at the airshow.