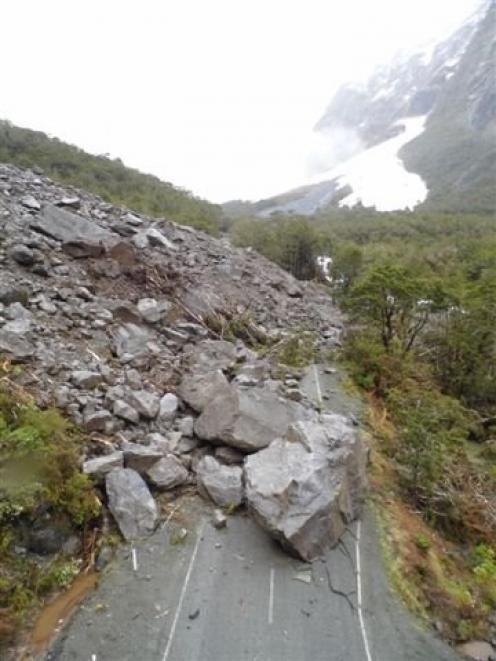 The slip on the Milford Rd. Supplied photo.
A 67-year-old man who died after a work-place accident near the Homer Tunnel in Fiordland yesterday afternoon had been clearing a slip, police say.

About 12.50pm, a worker for a contract company was killed while clearing a slip near Monkey Creek on the Milford Rd, Sergeant Tod Hollebon, of Te Anau, said.

He was treated at the scene by St John paramedics who had flown to his aid in a rescue helicopter from Te Anau, she said. Sgt Hollebon said despite the best efforts of all those on site, the man could not be revived.

Two other workers also sustained minor injuries in the incident and were treated at the scene.

Occupational Safety and Health is investigating the incident, as is a safety representative of the contract company.

Police would also investigate on behalf of the coroner, Sgt Hollebon said.

The accident is understood to have involved equipment being used on site at the time, but the details had not yet been established, Sgt Hollebon said.

The man's name has not been released as police were contacting next of kin.