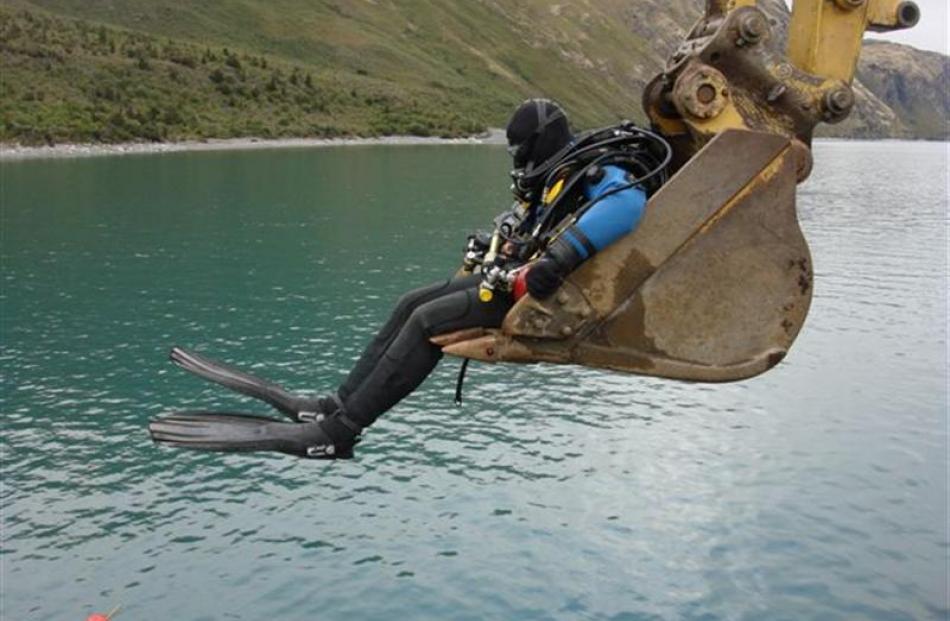 Deep-diving expert Simon Mitchell is lifted in a digger bucket during the retrieval attempt. photos by Toby Wallis. 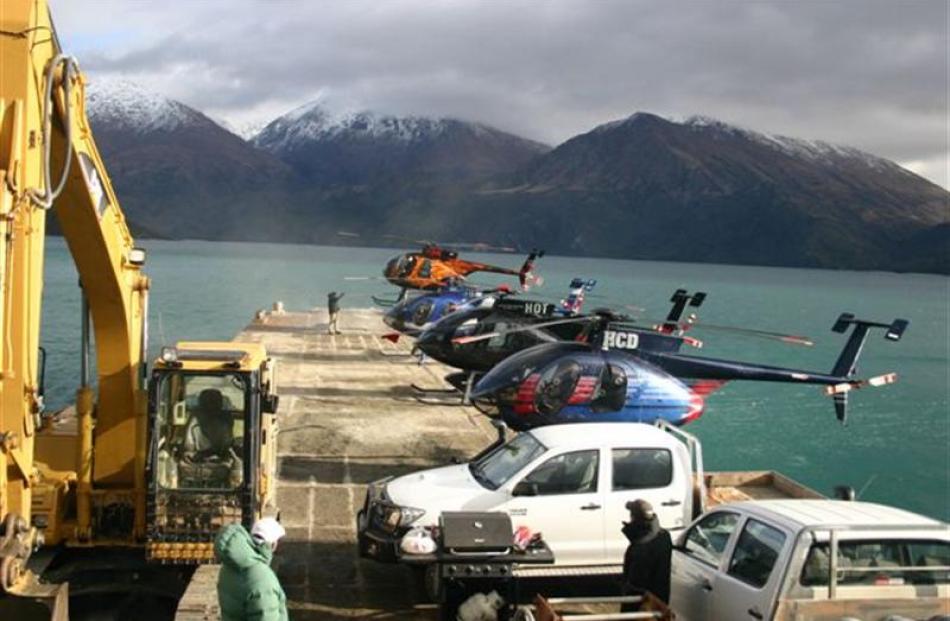 Vehicles of all descriptions line up on the Minaret station barge during the weekend attempt to retrieve the Saxton helicopter engine from Lake Wanaka at the weekend.

Attempts to retrieve a Robinson 22 helicopter's engine from the bottom of Lake Wanaka proved unsuccessful because of poor underwater visibility.

However, the volunteers who took part in the weekend attempt were happy with the operation and the teamwork and were keen to try again in a couple of months, organiser Toby Wallis said yesterday.

The barge-based "recreational" exercise displayed yet again the practical level of problem-solving being used in the Wallis family's bid to retrieve the engine so it can be examined by inspectors from the Transport Accident Investigation Commission.

The commission had decided not to keep looking for the engine, which was initially sighted in early searches by a navy submersible in November, but could not be found again in a repeat search soon afterwards.

The engine is believed to be about 75m below the surface near Mou Waho Island.

The Wallis's friend, Morgan Saxton (31), of Haast, died in the lake accident on November 1.

As in the November operation, the large Minaret station barge belonging to Jonathan Wallis was central to last weekend's exercise.

"We lifted him [diver Simon Mitchell] in and out by digger because you can't be too strenuous after such a dive . . . it was the best way to get him in and out of the water and he was pretty happy with that," Mr Wallis explained.

The poor underwater visibility was the only hitch in an otherwise successful operation, he said.

Visibility had been affected by the recent big storms, and it was hoped it would improve within the next two months.

Mr Mitchell is an Auckland dive physician and anaesthetist with an interest in wrecks in deep water.

He is also a specialist in decompression illness and other deep diving hazards.

Bill Day, of Seaworks, a Wellington-based company which specialises in a variety of global marine services - including salvage, surveys and treasure-hunting - also helped out.

Mr Day has a home at Mt Barker.

A navy diver who worked on the official retrieval in November also returned as a volunteer.