Mystery object 'may have been moved' 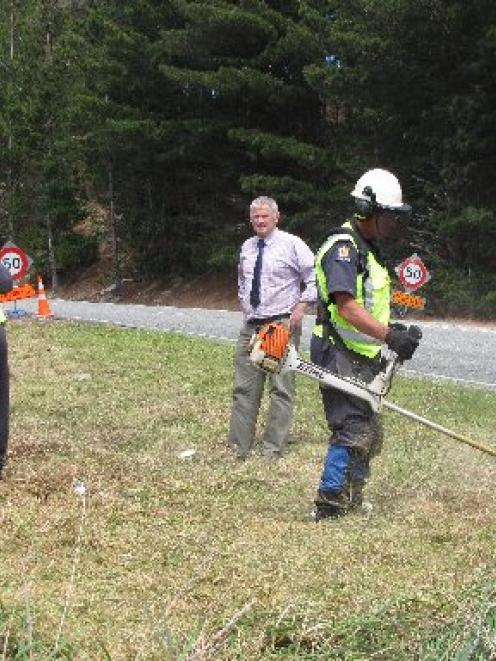 A police special search group spent a third and final day yesterday combing the road verges of the Maungawera Hill on State Highway 6 for the object that fatally injured Mr Hale as it passed through the station wagon he was driving about 6.20am on October 24.

Investigation spokesman Detective Sergeant Derek Shaw, of Central Otago, said the exhaustive roadside search of an area about 450m by 30m, using probes, metal detectors and weed-eaters to clear scrub, had uncovered many items, including bottles, cans, hubcaps and rocks.

However, nothing had been found that could be implicated in the incident at this stage.

''We're still looking for that breakthrough.''

With the search complete, police would ''need to turn our minds to the fact that the object is outside the search area or, for whatever reason, has been removed from the search area''.

''It's just one of the many possibilities, bearing in mind we don't know what we're looking for,'' Det Sgt Shaw said.

If the item had been shifted, it was most likely done with ''good intent, as opposed to anything malicious'', but anyone who might have done so was urged to come forward.

''Especially within the first hour of the crash, a member of the public might have seen something on the road which they've removed, possibly more for safety ... which is perfectly understandable.

"It's just that if they have, it could be a critical part of our investigation.''

The extent of this week's search indicated the level of importance police placed on finding the item that passed through Mr Hale's car, Det Sgt Shaw said.

''We want to work hard for our victim to solve it, but also we want to prevent whatever has happened from happening again, so that's our motivation.''

While no further searches of the area were planned, it was hoped the steady stream of information from the public would continue.

Police were still interested in talking to the drivers of a vehicle towing a boat and a white four-wheel-drive utility, both seen in the area at the time.

The owner of one white utility had already spoken to police.