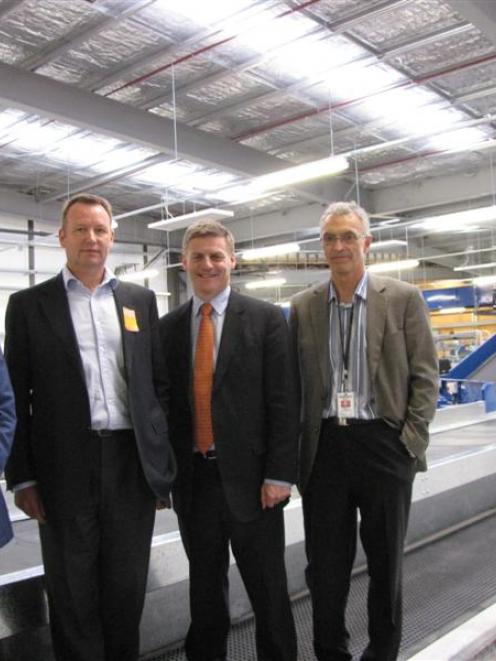 But the dispute, which is headed for a High Court hearing next May, was very much to the forefront.

But, he told the assembled crowd, it was important both Air New Zealand and the Queenstown Airport directors continued to work together to develop the airport to "leap-frog growth predictions".

"As a point of example, the $4 million baggage make-up facility was commercially agreed between Queenstown Airport and all the airlines over a meeting and follow-up emails [and] concluded in a period of three days. 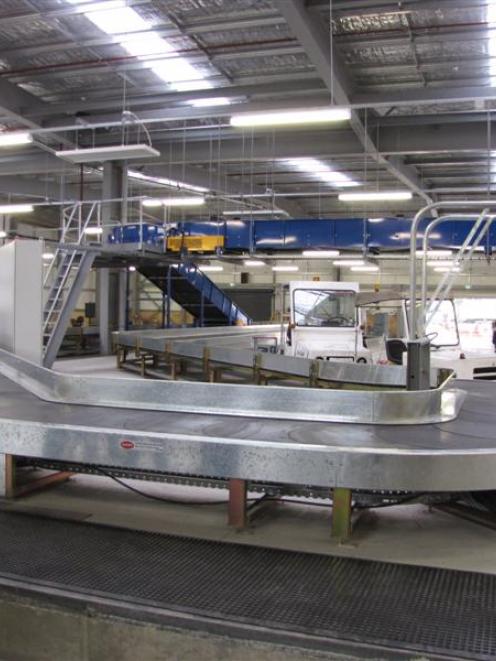 Part of the baggage-handling facility. Photos by Tracey Roxburgh.
"I suggest this is not only an outstanding, no-nonsense time frame to achieve a commercial deal in the airport/aviation industries, but it would be for most commercial deals, regardless of the industry."

At the time of the function, Mr Hazeldine was in the Middle East - "dealing with Israel and Palestine", Mr English said.

"I suggested to him we might need some of his skills to help resolve some of the issues around the airport if he's been dealing with Israelis and Palestinians. Everyone agrees with the big picture - we need more capital ... we need more competition from the airlines ... that means we need to get on and resolve those issues whatever they are."

The new building, which at 1470sq m more than tripled the baggage capacity of the airport, was in response to "outstanding, double-digit passenger growth", Mr Sanderson told a crowd of about 40 people.

"Looking forward, we are heading into one of our busiest ever summers - during our busiest week, we will be servicing more than 225 domestic and international flights."

Mr English said the airport would be servicing its one millionth passenger in the next 12 months and it was exciting to see it leading the way in helping Queenstown meet its growing tourism demands.

"The airport is not only the entrance to one of the world's top tourism destinations, but a significant asset for Queenstown's future and for its 60 business tenants and more than 300 people working within the airport perimeter.

"The standards that our tourists are now enjoying is fantastic."

• The legal proceedings will be discussed at an extraordinary meeting of the Queenstown Lakes District Council next Tuesday, Mayor Vanessa van Uden confirmed yesterday.

But the meeting will be held with public excluded.

The QLDC's council corporate and regulatory general manager, Roger Taylor, refused to give the reasons for the meeting when approached on Thursday but yesterday Ms van Uden confirmed the item did pertain to the battle between Queenstown Airport, Auckland Airport, the council and the Queenstown Community Strategic Asset Group.