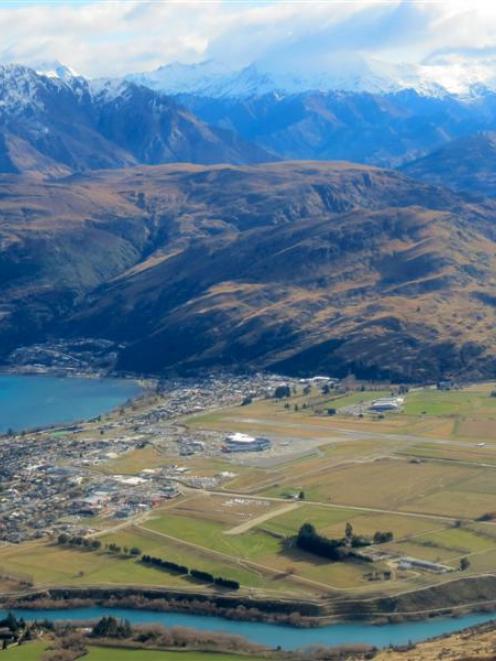 Frankton Flats and the Queenstown Airport from above. Photo by ODT.
Rich and famous travellers visiting Queenstown will be welcomed at a new $200,000 dedicated corporate jet terminal early next year.

The Queenstown Airport Corporation (QAC) announced yesterday it had signed an agreement to lease land next to the terminal to develop a fixed-base operation (FBO) for corporate jet passengers to be developed by Auckland corporate jet handling company Air Center One and Capital Jet Services, of Wellington.

The lease begins on January 1, 2014 and the new mini terminal, to be known as ''Queenstown Corporate Jet Services'', will be built on a small strip of land between the international arrivals area and the Hertz building.

The building will cater for up to eight passengers, plus crew, and be designed to make their transit through Customs and immigration as efficient as possible.

The terminal is expected to be operational by March next year and is intended to be a stopgap facility for the next three years, pending the resolution of land acquisition plans by QAC.

The development of a larger multimillion-dollar purpose-built operation, on the southern side of the runway next to the threshold of Runway 23, is planned.

However, the land required is owned by Remarkables Park Ltd.

Air Center One chief executive Rob Leach, of Auckland, said Air Center One and Capital Jet Services would build, finance and manage the facility as a joint venture.

The continuing growth of corporate jet movements to Queenstown and provision of an enhanced customer experience prompted the development.

Mr Leach said the users of corporate jets came to only two destinations in New Zealand - Auckland for business and Queenstown for pleasure.

''The new FBO will enable us to raise the bar for corporate jet operators in Queenstown by providing similar facilities to Auckland and Wellington airports as well as the discreet, professional, high-end service they value,'' he said.

Airport chief executive Scott Paterson said the new building would be a long-awaited improvement to Queenstown's corporate jet facilities and help position the airport as a key New Zealand gateway for premium visitors.

''The new facility is the first step in enhancing our corporate jet facilities.

''It will provide a dedicated space for our passengers to be welcomed, hosted and processed, creating a better first impression of Queenstown and a seamless transition from air to land.''

About 20 to 25 corporate jets visit Queenstown Airport each month during summer and this summer was expected to be busier, Mr Leach said.