New Great Walk to be 'one of the best' 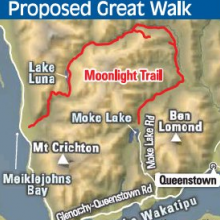 The Department of Conservation is working on plans for a Great Walk near Queenstown, the country's 10th.

The proposed three day route is through the spectacular scenery of nearby Mt Creighton Station.

The ''Moonlight Trail'' is part of a mooted trade off between the Government and the company which owns the perpetual lease for the 15,000ha station.

It is detailed in documents obtained under the Official Information Act from the Overseas Investment Office, which has rubber stamped the deal. Documents state: ''It is likely to become one of the best walks in New Zealand.''

Conservation Minister Maggie Barry has confirmed her department is working on the idea.

She will not comment before the station's ''tenure review'' is finalised and a formal proposal for the walk is tabled.

It would wind from Meiklejohns Bay on the Glenorchy Queenstown Rd to Lake Luna, then along to Moke Lake.

The draft proposal says it could potentially link to Te Araroa, the track from Cape Reinga to Bluff.

Officials believe it could become one of New Zealand's most popular walks because of its proximity to Queenstown.

Destination Queenstown chief executive Graham Budd said: ''I'm not familiar with the specific proposal, but any growth in our walking network has got to be good for us.

''I don't see it as a competitive threat to the other Great Walks; just an alternative that would make people stay longer or come back.''

The ''tenure review'' trade off is for 5342ha of the station to become freehold, owned by Mt Creighton Station Ltd, with the remaining 10,461ha reverting to Crown ownership.

Shareholders in Mt Creighton Station Ltd are four American families and two New Zealand families, who intend to build multimillion dollar lodges for themselves on the freehold land. The trail would also be built through the freehold land.

Her research showed in some cases one fifth of a parcel of land sold by the Crown for $60million had since been on sold for $300million - and that was just one side of the balance sheet.

''I would struggle to see how [tenure review] is a good thing for New Zealand,'' she said.

''I think we're losing much more than we're gaining.''

She said the trail was a good idea but strong covenants were needed to guarantee public access.