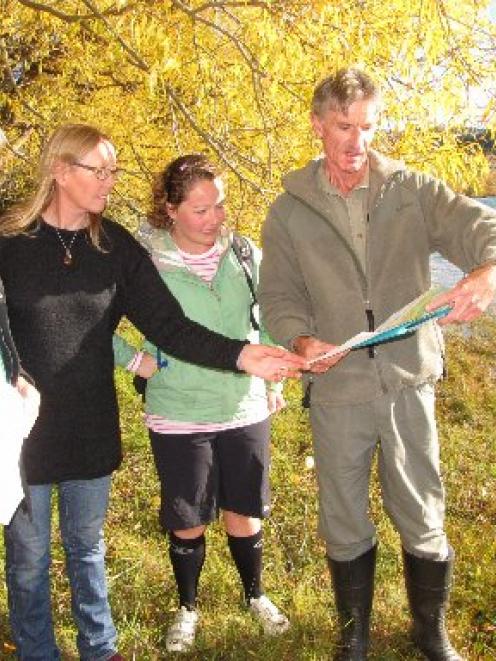 Discussing land where a community river park has been proposed next to the Luggate Red Bridge are (from left) Wanaka Community Board member Bryan Lloyd, landscape architect Anne Steven, district councillor Ella Lawton and river conservationist Lewis Verduyn-Cassels. Photo by Lucy Ibbotson.
As corporate and community interests collide over a parcel of land on the banks of the Clutha River near Wanaka, the future of a proposed public riverside park - featuring conservation, recreational, historic and educational elements - is unclear. Lucy Ibbotson talks to those behind the park proposal and the long-term landowner.

Plans for a community river park at the Luggate Red Bridge still stand despite the sale this week of one of the properties needed for the project.

However, one of the three properties comprising the roughly 2.75ha proposed park site on the right bank of the Clutha River, just upstream of the bridge, was sold this week by Contact Energy to an undisclosed buyer.

Mr Verduyn-Cassels said while the sale was ''not desirable'', the group ''certainly haven't given up on the vision'' of a park and was working to raise more capital to bolster some initial indications of funding support.

''Whether or not we have to negotiate with the new buyer ... they might actually like what we're doing, they might be one of our supporters, we don't know.''

The group was also working with the Queenstown Lakes District Council and Otago Regional Council towards designating the land a ''special purpose site'' for community benefit, as it had been in the days of the river punt, before the bridge was built nearly a century ago.

The three properties were acquired by Contact's predecessors, the Electricity Corporation of New Zealand, in the 1980s and have a combined rateable value of $1.17 million.

They are among Contact's landholdings along the river which the power company is selling, following its April 2012 decision to withdraw plans for further hydro development on the Clutha.

Mr Verduyn-Cassels said the concept for the park - which would be administered for the community by a proposed Red Bridge River Park Trust - had received ''total support'' from everyone the group had approached, except Contact.

The New Zealand Transport Agency, Upper Clutha Tracks Trust, Te Kakano Aotearoa Trust, Department of Conservation and the councils had all had input into the project.

The park's advocates had asked Contact to join them in a ''community partnership'', or to allow time to find funding, but were advised the intention was ''to sell this land regardless'', Mr Verduyn-Cassels said.

''That's pretty heartbreaking for us, because we had hoped that they would be supportive of a community project ... it's hard because they have a corporate agenda and we have a community agenda and the two don't seem to mix very well.''

Contact's trading, development and geothermal resources project manager Neil Gillespie said the park proposal was presented to the power company after marketing had begun for the now-sold property and after sale negotiations were under way with the previous owner of one of the other pieces of land.

Mr Verduyn-Cassels has tenanted the third property since 1991 and carried out his own native restoration project there.

''Until the processes around any sales are complete we have advised the group that we are not in a position to further consider the proposal,'' Mr Gillespie said.

The proposal would be ''at the discretion of any new owner''.

Contact had suggested the proposed park trust ''reconsider the impacts on their proposal in the event that the only land that can be considered to form part of it will be the property currently tenanted by Lewis Verduyn-Cassels''.

Mr Gillespie said during the past 11 months Contact had had ''a number'' of discussions with Mr Verduyn-Cassels regarding its intentions to sell the property.

''As current tenant we offered him first rights to purchase the land, which he has chosen not to accept to date.''

Mr Verduyn-Cassels said he did not want to buy the land himself, as he already regarded it a public space, frequently visited by recreational users, which should be acquired as a community asset.

Under the proposal, the park would function as a resource centre for freshwater management and research, outdoor education, ecological restoration and historical education and host work experience for students and travellers.

It would include habitats for skinks and the endangered longfin eel, a native nursery, information panels detailing the area's history - including the story of the river punt man and Chinese gold miners - and a large riverside commons area for community gatherings.

An official opening would coincide with the Red Bridge centennial celebrations in October 2015.

Mr Verduyn-Cassels said he initially pitched the concept to Contact, the Luggate community and Doc in June 2012 and again in May 2013.

Earlier this week, Queenstown Lakes deputy mayor Lyal Cocks - one of several councillors and Wanaka Community Board members who have visited the site - said the proposal had merit.

''I think it's an interesting idea worth pursuing and [I'm] wanting to help discussions with Contact ... to see whether there's any option for timing to get some sort of trust formed to see if money could be raised to acquire that area,'' Cr Cocks said.