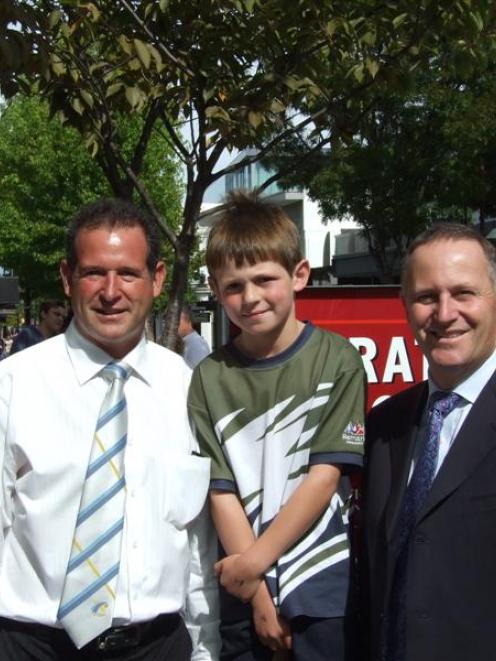 Prime Minister John Key (right) meets Cody Campbell (8), a pupil at Remarkables Primary School and past president of the Queenstown Rotary club Chris Campbell. Photo by Christina McDonald.
With the Government reviewing the Resource Management Act, Prime Minister John Key said it was hoped the planning and approval process for new developments, such as the proposed Queenstown convention centre, would be made quicker.

Mr Key was in Queenstown yesterday, starting his day by visiting Wakatipu High School, lunching with the Rotary club, opening the restored historic boat shed and slipway at Frankton and attending a function at the Bungy Centre.

In an address to the Queenstown Rotary Club at SkyCity, Mr Key said ''fundamentally'' Queenstown needed a convention centre as it was ''the sort of thing that will bring people in all year round ...''

''But you still have to go through a planning process and approval and if that was going to take you five years or 10 years to get approval, then you're going to find that extremely frustrating.''

Later in the day, he said he did not rule out a financial contribution from the Government towards the centre, but would wait for details of the proposal from the Queenstown Lakes District Council.

He said as Tourism Minister he was ''acutely aware'' of the importance of a centre to Queenstown and saw it as part of a national strategy linked with Auckland and Christchurch centres.

He told the Rotary club he hoped to get New Zealand back into surplus within two years, and said two years ago the deficit was $18 billion.