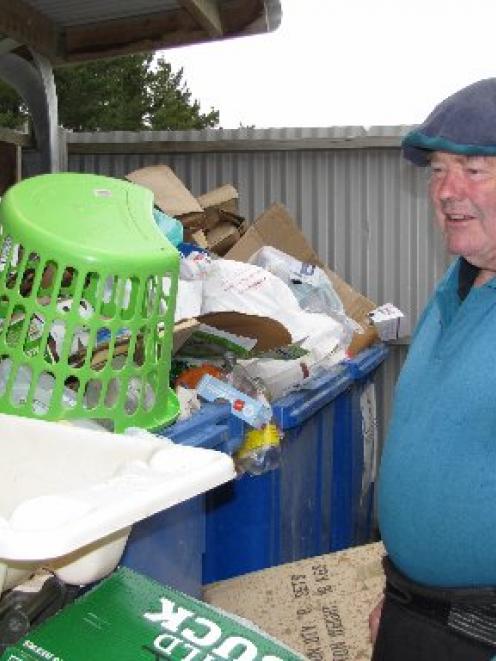 The state of the facility at the end of the Easter holiday was pointed out to the Otago Daily Times by Lake Hawea resident Richie Hewitt.

The bins for paper, plastic and cans were filled to overflowing, wasps were feeding on the spilled contents of bottles and cans, and other rubbish - including old chairs - was spread around the station.

Mr Hewitt said the problem was not due only to ''cribbies''.

''It's a lot of locals who think they can just throw their rubbish in any old how because they are ratepayers and they can do what they like. Well, it's time they were brought to heel.

''The council's already warned us they will take it off us if we don't behave.''

A council spokeswoman, who did not want to be named, told the ODT ''ongoing misuse'' of the station ''will inevitably lead to reconsideration of the service''.

She said the station was installed before the kerbside collection was introduced at Lake Hawea.

''The council proposed closing the drop-off area but the community was opposed to such a closure, due to the convenience of the facility for holiday home people, in particular. There have been ongoing issues with the use of the area, especially during busy periods.''

Mr Hewitt was critical of the council for not taking prosecutions, even when it was presented with evidence of who was responsible for the station's misuse.

His sympathy lay with the contractors who would have to sort out the mess, and believed better supervision of the station was needed.

Lake Hawea Community Association member Dennis Hughes said there had been discussions with the council about the station and it had been ''pretty good'' over the past two or three months.

He expected the problem lay with holidaymakers, saying at peak times the station should be cleared more often.

Wanaka Community Board chairwoman Rachel Brown said last week the community had taken good care of the station over a period of about eight years but ''lost heart'' when the council changed its contractor.